Couperose isn't exactly a disease in medical terms, but an aesthetic problem that can lead to Rosacea. Thus, you must consult a dermatologist because it could be the first symptom of a more serious problem. 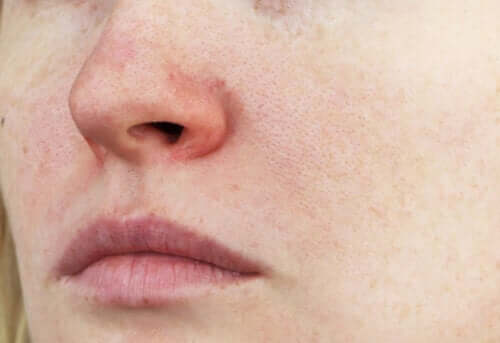 Couperose is a dermatological condition that can lead to Rosacea or other serious problems if left untreated. The appearance of reddish patches in the skin is the main characteristic, mainly due to temperature changes.  It isn’t a disease in medical terms but is mainly an aesthetic problem.

Facial redness is normal under some circumstances, especially during the winter due to the cold temperatures. However, if the rednesses becomes permanent and intense over time, the problem might be Couperose.

This condition affects more women than men and is due to both external and internal causes. It’s also more frequent in those with fair or pale skin. It’s important to diagnose this problem as early as possible to undergo proper treatment.

Couperose is a vascular anomaly that mainly manifests in the venules and arterioles. This is because they have very little elasticity. Thus, when the circulation increases sharply, the skin becomes red and just stays. The reason is that the blood vessels aren’t elastic and have a hard time returning to their normal state.

Generally, reddish areas cover the cheeks, chin, and nose, although they can also appear anywhere on the face or neckline. Anyone is prone to this type of redness, but it’s usually temporary. When it becomes permanent, it might be due to Couperose.

There are two phases in this type of skin condition. In the first one, there’s only redness of some areas of the face or neckline, which at first disappear quickly. However, they progressively become permanent. In the second phase, telangiectasia, better known as spider veins, appear.

These look like a small reddish web with thin lines that sort of look like long, thin spider legs (hence the name). They range from red to slightly violet and are a definite sign of the presence of Couperose.

The origins of Couperose

As we said above, this vascular anomaly is due to the lack of elasticity of the blood vessels. When the small vessels dilate for any reason, they remain so and fail to contract again. Then they become more visible through the skin and this is the reason why there’s a reddish area.

Also, the factors that can lead to the dilation of these small vessels can be:

The exact cause for which Couperose occurs is unknown. However, we do know that genetics plays a role in it. Thus, it’s common for this anomaly to occur in people whose parents also had it.

The main manifestation of Couperose is the appearance of reddish areas and spider veins. Only on counted occasions are these are accompanied by a burning sensation or localized pain. In some cases, this condition is the first phase of Rosacea, another skin condition. This is especially common if it manifests with facial spots or pustules.

Many people don’t have problems after the initial phase. In any case, it’s always a good idea to consult a dermatologist when the first symptoms occur. This is because it’s a lot easier to control when you begin treatment early.

Prevention is usually more effective than any type of treatment when it comes to dermatological problems. Because the cause of Couperose is still a mystery to science, all they can recommend is that you perform a daily skincare routine using appropriate products for your skin type and adopt overall healthy lifestyle habits.

Once the condition manifests, the treatment will depend on its severity. In general, some creams can reduce the blood flow in the affected area. Meanwhile, some medications can help. However, vascular laser treatment is often a lot more efficient.

Seven Types of Food that Can Reduce Rosacea
You don't have to resort to makeup in order to reduce the appearance of rosacea. In addition, you can also treat it by improving your diet. Read more »