As coronary artery disease becomes increasingly common, many people look to optimize their heart health. A simple fruit can help to cleanse blocked arteries and prevent hardening. Learn more about the benefits of consuming pomegranate extract. 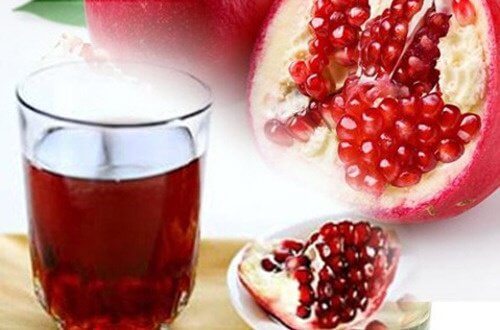 Many people worry about how to prevent blocked arteries. Unquestionably, coronary artery disease is becoming increasingly common throughout the developed world. Due to a poor diet and a sedentary lifestyle, both of these factors raise levels of cholesterol in the blood. However, this health problem can be prevented and fought naturally with a simple drink that you can make at home.

To come to this conclusion, scientists used rodents with coronary problems and fed them pomegranate extract, over a period of time. Once the study was complete, they concluded that pomegranate consumption prevented the rodents from experiencing the accumulation of plaque in arteries. The extract also prevented arteries from becoming blocked and hardening.

This investigation into the benefits of pomegranate extract and how it can cleanse blocked arteries also uncovered the following advantages:

How can such a simple fruit cleanse blocked arteries?

Mainly due to their high levels of antioxidants, out of all the benefits of pomegranates, the vitamin C and polyphenols contents really stand out. According to Nobel prize-winner, Linus Pauling, one of the main causes of cardiovascular disease is the deficiency of vitamin C.

Pomegranates also contain an important anti-inflammatory power that has an essential role in the prevention of heart problems. Thanks to these properties, pomegranates help to reduce high blood pressure, are good for blood circulation, and boost the immune system to prevent infections.

This powerful pomegranate and apple juice recipe has a high concentration of substances such as: flavonoids, tannins, and fiber. These are responsible for reducing cholesterol and increasing the cleansing process of blocked arteries.

Wash all of the fruits thoroughly to remove traces of pesticides and bacteria. Peel the pomegranate and chop it into large pieces, along with the apples. Finally, put everything together in the blender, with some water to facilitate the blending. Drink immediately.

Besides helping cleanse the arteries, regular consumption of this pomegranate juice also gives other important benefits to your body:

5 Foods that Seriously Hurt Your Heart
Heart health is fundamental for healthy living. We all know that it's the body's engine, but, do we take care of it as we should? The truth is that it's not always the case. In this article, you'll learn about 5 foods that harm your heart. Read more »
Link copied!
Interesting Articles
Taking care of your body
The Causes of Ingrown Hair and its Removal