Characteristics, Uses, and Side Effects of Salbutamol

Salbutamol is a beta-adrenergic agonist drug that has a high affinity for beta-2 receptors. It's mainly used for the treatment and prevention of asthma and bronchospasms in the treatment of obstructive pulmonary diseases. 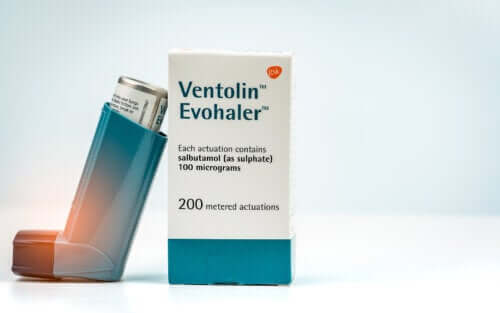 Salbutamol, also known as albuterol, is a widely-used drug for the treatment of asthma and chronic obstructive pulmonary disease (COPD). Its mode of administration is via inhalation in order to produce a direct effect on the smooth muscle of the bronchi.

Pharmaceutical companies launched this drug into the market in 1969 under the name of Ventolin. It’s a selective stimulant of the beta-2-adrenergic receptors.

It’s important to know these terms in order to understand how salbutamol works. Chronic obstructive pulmonary disease is a chronic condition (as per its name) that affects the flow of air from the lungs.

The cause of this disease is usually due to contact with toxic particles over a long period of time — tobacco, for example.

The most characteristic symptom is a persistent cough. However, it doesn’t usually appear until the disease is relatively advanced and has produced significant damage.

This disease affects the airways, which become narrowed and inflamed, producing more mucus. A patient may have difficulty breathing as a result. In addition, coughing, shortness of breath, and wheezing are common.

It isn’t yet clear why some people have this disease and others don’t but it’s likely to be due to a combination of factors, both environmental and genetic.

It’s important to know there’s no cure for asthma. However, there are many treatments to reduce the discomfort that’s typical of this condition. In fact, this is just what a salbutamol treatment does. In addition, you must be in constant communication with your health care provider so they can monitor your symptoms and adjust treatment as they see fit.

Check out these Eight Tips to Control Asthma

The effect of salbutamol in the body

This drug interacts with beta-2-adrenergic receptors — the main smooth muscle receptors in the bronchi. A series of biochemical reactions trigger and start signal transduction when these receptors activate due to the action of this drug.

This signal decreases the levels of calcium ions, necessary for muscle contraction, as well as the number of inflammatory cells in the airways. Thus, it reduces and counteracts the symptoms of asthma and COPD. This is because these two diseases affect the smooth muscle of the bronchi.

Finally, we must say that salbutamol has a more prolonged action than isoproterenol, another medication with similar characteristics. The reason for this is that salbutamol isn’t an enzyme substrate for the processes of cell metabolism.

Find out what’s The Relationship Between Asthma and Rhinitis

Side effects of salbutamol

As it happens with other drugs, salbutamol produces side effects and you must take them into account before beginning treatment with it.

Some of the most frequent ones are:

We must also mention that controlled clinical studies and clinical experience revealed that inhaled salbutamol, like other beta-adrenergic drugs, can produce significant cardiovascular effects. Increased blood pressure, changes in heart rhythm, and alterations in the electrocardiogram, among them.

This drug is a beta-adrenergic agonist with a high affinity for beta-2 receptors. It’s mainly used for the prevention of asthma and bronchospasm in the treatment of obstructive pulmonary diseases.

Always follow your physician’s recommendations and inform them of any other medication you may be taking. This is because these could interact with each other and produce undesired effects.

Finally, keep in mind that there’s no cure for asthma and COPD, but that you can definitely treat the symptoms and improve your quality of life.