The Relationship Between Asthma and Rhinitis

There seems to be a relationship between rhinitis and asthma. In fact, many people experience them almost at the same time and the medication doctors prescribe works for both conditions as the symptoms are quite similar. 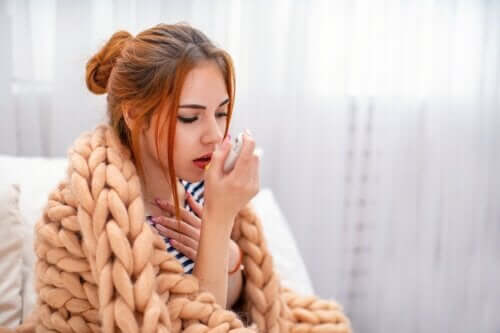 The relationship between asthma and rhinitis has been known for a long time in medical science. It isn’t uncommon for an asthmatic patient to show up with symptoms of rhinitis in the spring and vice-versa.

OK, but, why this intrinsic link? For some researchers, it originates in the immune system; for others, it’s a similar form of the respiratory mucosa shared between the bronchi and the nose.

This is an inflammation of the mucous membrane of the nose. It can respond to various etiological agents, but the end result is always an increase in its size by the accumulation of fluids and inflammatory cells, all based on an external agent or an internal stimulus.

There’s infectious and non-infectious rhinitis. In the first case, a microorganism invades the nose and infects it; it can either be a virus or bacteria. The body reacts to the colonization and sets mechanisms in motion for the expulsion of the intruding agent. This is what determines the inflammation.

The most common non-infectious rhinitis is the allergic form, which appears to a greater extent in asthmatic patients. The external agent, neither a virus nor bacteria, is a particle the immune system recognizes as foreign so it turns against it. Pollen is usually one of the causes during certain seasons.

Read about Spring Asthma: An Inconvenience with a Solution

Bronchial asthma is an inflammation of the bronchial mucosa with hyperreactivity of the bronchi. This means the airways close abruptly and prevent the normal flow of air beyond the inflammatory process.

This condition is on the list of obstructive and chronic respiratory diseases. It evolves in the form of acute episodes within the long term. Certain triggers of the crises, such as colds or infections, are more common in winter. This is the season when people are most afflicted by it.

Doctors usually diagnose the pathology at an early age. These children either experience bronchospasms when physically active or when the temperature drops. Firstly, the physician treats them with bronchodilators to evaluate their evolution. Then, if the crisis repeats, they go ahead and diagnose asthma.

The degree of seriousness isn’t always the same and its evolution isn’t linear. Thus, there are people with mild forms of the condition who may only have one attack a year, while others go through a nearly persistent state of shortness of breath.

Causes of the relationship between rhinitis and asthma

There are many varied explanations for why patients with asthma often suffer from rhinitis. Estimates indicate that up to 75% of them go through a period of inflammation of the nasal mucosa. Conversely, those diagnosed with rhinitis have bronchospasm in 40% of cases. Let’s look at some theories about this link.

One of the explanations for why people with rhinitis also have asthma is the lack of sufficient flow through the nose. There’s inflammation of the mucosa so these patients prefer to breathe through their mouths. This is because it prevents the humidification and heating of the air.

Thus, when cold dry air reaches the bronchial tubes, the airway tends to contract because this flow is identified as harmful. Several scientific studies revealed that bronchoconstriction increases when it’s cold, for example, between snow sports and winter.

Research in both directions shows the relationship between all parts of the respiratory mucosa. It’s likely that the cells in the bronchi will react in some way if a person gets allergens in their nose. Conversely, the nasal mucosa overcompensates when the lower airway contracts.

Part of the pathophysiological mechanism is in the nerve communication and in the reactivity of the blood vessels. This is what seems to be behind exercise-induced asthma, mediated by the discharge of adrenaline and noradrenaline unleashed by sports stimuli.

These neurotransmitters link rhinitis and asthma by producing closure of the blood vessel caliber. Throughout the respiratory mucosa, this narrowing reduces circulation and the ability to respond to external agents.

The immune system and the relationship between rhinitis and asthma

Eosinophils are a special type of white blood cells. They have a special role in mediating whole-body allergic reactions. In fact, researchers knew their role in both rhinitis and asthma.

We assume they’re similar mechanisms so it makes sense to assume that allergic reactions share the common pathway of these cells and that their increase in situations against external agents is key.

Furthermore, the substances of inflammation aren’t static, but rather take advantage of the blood circulation to move. Thus, they can pass from the nose to the bronchi.

Rhinitis and asthma: similar, but different

Finally, we can explain the relationship between rhinitis and asthma through various hypotheses but it doesn’t mean they’re the same condition. The drugs used for treatment are similar, although the approach isn’t the same.

It’s essential for physicians to be able to distinguish one condition from the other so they can prescribe the correct form of therapy. In any case, asthmatic patients must learn to manage rhinitis crises as they have a high probability of being afflicted by it.