Characteristics and Function of Neurons

The function of neurons is sort of like that of messengers. They're large communication networks that allow the organism to operate properly. Are you interested in knowing more about it? Continue reading then. 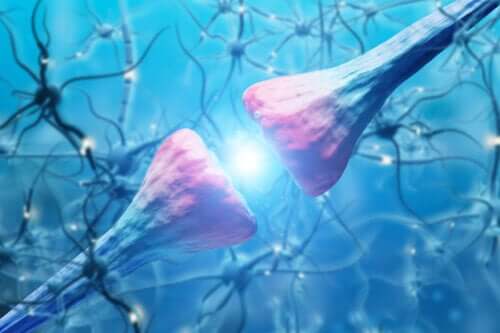 Looking at the function of neurons, and how they work, reveals that these cells are a sophisticated piece of natural “engineering.” You may not be aware of it but neurons are the basic unit of the nervous system and they allow the body to control and coordinate all of its activity.

The way neurons function makes it possible to transmit information to the body, both external and internal, by means of a complex mechanism of chemical and electrical signals. Also, the impulses can transmit at a speed of 224 miles per hour through certain nerve fibers.

Thanks to the way neurons work, we can withdraw our hands when we touch a burning hot surface, feel when something is soft, experience pain, know if something is cold, and so on. These cells are like messengers within our nervous system.

Characteristics and function of neurons

Neurons are a type of cell and are part of the nervous system. Their basic function is to receive and transmit information through electrical impulses. Neurons create extensive communication networks throughout the nervous system.

These cells have a star-like shape and a central body that contains the structure that keeps them alive. They also have several branches, within which there are many short and tuft-like dendrites. In addition, they have a pretty long branch, called the axon.

People previously believed the organism wasn’t capable of producing new neurons in the brain, throughout life. However, a team of scientists from the medical Karolinska Institutet in Sweden conducted an experiment and determined this isn’t the case. The brain can produce up to 1,400 neurons per day, thanks to a process known as “neurogenesis.”

As mentioned above, neurons are made up of three elements. Let’s look at each one of them:

Check out these Five Simple Habits to Help Regenerate Neurons

All neurons basically have this structure but are sometimes different from each other according to the functions they perform. Thus, there are three types of neurons:

How do neurons function?

The structure of these cells determines how neurons function. Simply put, the neuron receives an electrical impulse through the dendrites. Then, it passes through the body, or soma, and then goes to other cells via the axon.

The axon releases a chemical substance called a neurotransmitter. This, in turn, reaches the dendrites of the next neuron and triggers the electrical signal that starts a new cycle like the previous one. In fact, each neuron can make thousands of connections.

Learn about Von Economo Neurons, the Cells for Socializing

There are several types of neurotransmitters that facilitate the various neuron functions:

Other facts about the functioning of neurons

As you can see, neurons are small messengers in the organism, since their main function is to receive and transmit information. They receive and deliver it to other neurons as well as to muscles and glands.

So, now you know that neurons have three main functions: sensory, integrative, and motor. The sensory function allows us to perceive internal and external changes, such as heat, light, and so on. Furthermore, the integrative function processes the information received to give an appropriate response. Covering up when we’re cold, for example.

Finally, the motor function causes the muscles and glands to act, or not to act, as required. There are neurons in our central nervous system (brain and spinal cord), but these cells are also in the peripheral nervous system. Their central nucleus is the ganglion located inside the digestive system.

6 Ways to Regenerate Your Neurons
You might have heard somewhere that everyone is born with a finite number of brain cells that are “wearing out” with time, and not being replaced. Thankfully, this isn’t true. In fact, you can regenerate your neurons by practicing certain habits. Read more »
Link copied!
Interesting Articles
Anatomy and physiology
How Extreme Temperatures Affect the Human Body