Cauliflower Ear: What Is It and Why Does It Happen?

If you're a fan of or do contact sports, you have probably heard about cauliflower ear. Do you know why this happens? Keep reading! 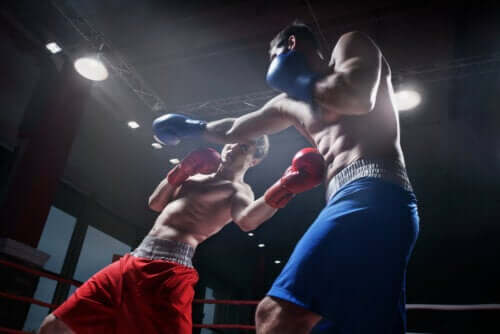 Exercise is an activity that helps keep your body healthy. However, athletes can suffer from different types of injuries. Cauliflower ear is one of the most common ones in contact sports.

The medical term for this condition is hematoma auris and it’s an irreversible deformity of the ear. It’s a result of a strong trauma or repeated blows to the area. This abnormality is common in people who play rugby, wrestle, or do mixed martial arts.

Cauliflower ear is more prevalent in men than women. In fact, studies have shown that up to 84% of male wrestlers and judokas have the abnormality. Despite being irreversible, there are different treatments that can improve the condition.

You’ll be able to notice this alteration of the ear from the moment it happens. So, you only need to look at it to know it’s there. It’ll be abnormally shaped, enlarged, folded over on itself and with irregular curves, looking like a cauliflower.

The first few symptoms are the same as a patient with trauma to any part of their body. In this sense, people can experience the following symptoms:

The main complication is aesthetic, since it can produce complete deformation in the most extreme cases. In addition, studies show that this condition can block the external auditory canal and cause hearing problems.

On the other hand, there’s evidence linking cauliflower ear with deafness. Also, patients with this deformity are more likely to develop ear infections than those without it.

For many years, people believed that the condition was associated with dementia. However, the neurological symptoms were the result of constant blows to the head. Other common complications in patients with cauliflower ear are:

Why does cauliflower ear occur?

As we mentioned earlier, this deformation occurs from a strong blow or repeated trauma to the ear. This action will form a hematoma, which will detach the auricular cartilage from the perichondrium, the tissue that gives it the necessary nutrients.

It’s important to remember that the pinna is made of cartilage, so it doesn’t have a direct blood supply. In this way, it gets the nutrients it needs through the perichondrium, an attached connective tissue that has a large blood supply.

The auricular cartilage will not be able to receive the nutrients it needs as a result of the separation, so the cells that make it will die. Then, this will cause the bruise that forms to fold in on itself, and there’ll be an increase in the production of fibrous connective tissue.

Both the doubling of the hematoma and the growth of scar tissue will be factors that cause deformities in the pinna.

Timely medical attention can prevent the cartilage from dying and improve the physical appearance of the ear. In this sense, it’s best to apply ice to the area to try to reduce the bleeding. Therefore, it’ll prevent a large bruise from forming.

Also, the specialist may try to drain localized blood through an incision. This is because using a syringe has been shown to be inefficient. Once the blood is drained, the doctor will join the tissues with stitches.

Then, the doctor will recommend applying constant pressure to the affected ear to prevent another hematoma. In addition, the pinna is an area prone to infection, so the doctor might also recommend taking antibiotics.

This is a deformity that can appear in many patients, which is why you should check the affected side frequently.

When cauliflower ear forms, it’s possible to get surgery called an otoplasty. The goal is to improve the ear’s physical appearance. It’s important to note that it won’t go back to normal, but it will look a little better.

The procedure consists of exposing the auricular cartilage in the back. Once exposed, the specialist will start to remove parts of it so it looks better.

Immediate medical attention is the best prevention mechanism. By draining the hematoma within the first few minutes, you can prevent cauliflower ear from forming. Many sportspeople have started using helmets, which prevents blows to the ears and head injuries.

It’s important to use the right size helmet that covers your ears for it to work right. For children who play contact sports, it’s important to make coaches aware of the importance of medical attention when the injury occurs.

Also, a good recommendation is to avoid taking anticoagulants before practicing contact sports. These drugs are capable of increasing bleeding, producing a larger hematoma. However, you should always check with your doctor.

A permanent injury that’s a symbol of pride

Despite causing total deformation of the pinna, many mixed martial arts fighters wear their cauliflower ear with pride. It’s considered a sign of respect and evidence of your commitment to the sport.

Finally, keep in mind that it’s an injury to your body and you should take it seriously. This deformity can lead to hearing problems, so you shouldn’t rule out corrective surgery under any circumstances.