The Benefits of Eating Four Cloves of Garlic a Day

If you want to be healthy, you don't really need to eat 4 cloves of garlic a day like some people believe. Experts do recommend including garlic as part of a balanced diet (in moderation) such as the Mediterranean diet. 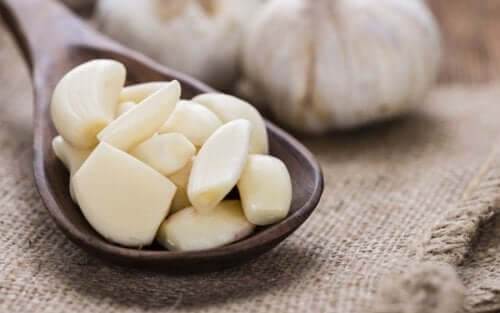 Garlic is a common ingredient all over the world. You can use it in a variety of dishes or to make dressings and salsas. It has a unique taste and delicious aroma that adds a very special touch to foods like garlic bread.

Garlic has been considered a universal remedy ever since antiquity

Garlic belongs to the allium family (the same as onions and leeks). One head of garlic is made up of multiple cloves.

According to the Spanish Nutrition Foundation, garlic (Allium sativum L.) is low in calories and a good source of minerals like iodine, phosphorus, and potassium. It also contains vitamin B6 and sulfuric compounds (notably, allicin).

Allicin is a sulfuric compound that is released when you cut or crush a clove of garlic. Many people believe that it has antibiotic and antioxidant properties, though people have also suggested that it might be a hypoglycemic agent (it could help reduce blood sugar levels).

The supposed benefits of eating four cloves of garlic a day

Some of the main benefits of eating 4 cloves of garlic a day as part of a balanced diet are the following:

1. It could lower cholesterol

Researchers have conducted several studies to see if eating garlic can help lower cholesterol and, in particular, bad cholesterol, the idea that it could be useful hasn’t been ruled out yet. However, it remains to be determined how.

That’s part of the reason why many people believe that eating garlic is good if you have high cholesterol. In addition, eating garlic cloves could also help prevent heart disease, stroke, heart attacks, and high blood pressure.

2. It could help fight viral illnesses

People also believe that garlic could help eliminate the pathogenic agents that cause viral infections (like a cold, for example), which is why they say that eating garlic can “scare away” infectious disease.

3. Benefits of garlic: it could improve bone health

One study found that garlic could help alleviate inflammation in menopausal women with osteoporosis. It could affect the metabolism of estrogen, which could be the scientific explanation for this particular health benefit.

Check out this article too: Treatment to Strengthen Bones and Joints

According to the Spanish Nutrition Foundation, garlic was used in ancient times to combat fatigue and increase the physical productivity of workers (in terms of strength and resistance).

For example, the Olympians of ancient Greece ate garlic before a competition. That’s why many people believe that garlic can contribute to athletic performance.

Other benefits of garlic

Some studies have found that including cloves of garlic in your diet on a regular basis could have the following benefits:

Many people also believe that eating garlic could help strengthen your immune system and prevent infections (or at least reduce their impact on your body).

The experts at the Spanish Nutrition Foundation explain that the the effects of garlic seem to manifest themselves when the garlic is eaten raw. However, some authors argue that they retain their properties after cooking as well.

Many people believe that you have to eat garlic raw to get the most benefits. However, other people argue that you should cook it a certain way to “activate” its beneficial compounds.

Still, others believe that if you prepare the garlic in a particular way, you can cook it without missing out on its benefits. For example, chop the garlic and let it sit for 45 minutes. This activates the allicin and keeps it from being destroyed when cooked. This means that you get the same benefits whether you eat it raw or cooked.

What are the Health Benefits of Garlic?
Perhaps you’ve once heard an older person talk about eating garlic each morning. In this article, we’re going to reveal the health benefits of garlic. Read more »
Link copied!
Interesting Articles
Health
What’s Phantom Limb Syndrome?