All About Introducing Solid Foods to Babies

When a baby is six months old, an important change occurs in their diet: it’s time for them to start eating solid foods. Although introducing solid foods to babies is challenging for parents, their body is prepared for them. 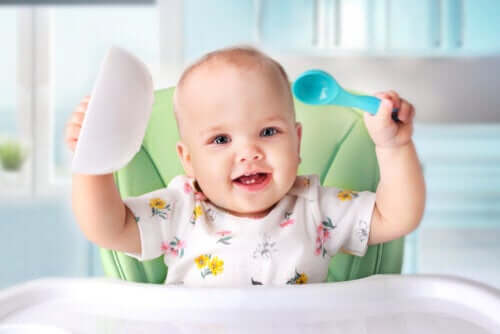 Introducing solid foods to babies is a delicate matter. It needs to be done gradually, when a baby is a few months old.

During pregnancy, the placenta plays a role in the nutrition of the fetus. Therefore, the baby’s digestive system must adapt after birth. This is the reason why newborns don’t tolerate all kinds of food.

In this article, we’ll tell you all about introducing solid foods to babies, how to know that your baby is ready for this, the recommended foods, and some general guidelines that you should take into account.

Introducing solid foods: How to know that your baby is ready

Babies should be breastfed exclusively during the first months of life. When your baby is six months old, you can start introducing solid foods. However, babies can continue to breastfeed up to the age of two, while simultaneously eating other foods.

In addition to age, a second element you need to take into account is related to height and weight. When babies are approximately four months old, they weigh twice as much as they did at birth. In some specific cases, the need to start introducing solid foods can be evaluated, although they’d be specific exceptions that a pediatrician should indicate.

Other aspects to consider are various signals babies’ bodies emit. The following indicate that a baby is ready to tolerate solid foods. For example, they:

Read on to learn more: Breastfeeding and Female Sexuality

Recommended foods for this stage

You can include many different types of foods in your baby’s diet to start this new stage. However, some are more recommended than others. Some of them are:

A related article you should read: Your Child’s Diet: Six Foods You Should Include in It

Introducing solid food to babies: how to do it

When it comes to introducing solid foods, it’s important to make sure that the baby doesn’t reject new foods. Although this can happen at the beginning, you have to keep at it.

In fact, you should administer small amounts of food. Remember that babies eat much less food than adults do. You need to give their digestive system enough time to adjust to the change. Thus, don’t get frustrated if they don’t eat much of the food.

Secondly, it’s easier to introduce solid foods by alternating with breastfeeding or formula. This means feeding your baby with a bottle or breastfeeding them, then giving them a teaspoon of food, and then more milk. This way, they’ll get used to the food.

During the process, the baby may play with the food. Sometimes, it’ll end up on their face, hands, bib, or floor, anywhere except their mouth.

Don’t scold your baby for it, as they could reject food the next time. On the contrary, you have to speak gently to them, encouraging them to eat. If your baby cries or doesn’t want to open their mouth, it’s best to wait instead of insisting.

Changes in babies when they start eating solid foods

When you start introducing solid foods, you’ll notice many changes in your baby. Their stools will be more solid, and their color and odor will also change. Similarly, their urine will become more cloudy.

Although some bowel movements may contain undigested food fragments, this shouldn’t alarm you. Bowel movement frequency can also vary, becoming less frequent. However, this isn’t a sign of constipation.

On the other hand, you’ll notice that, as your baby adapts to solid food, they’ll have a bigger appetite and eat bigger portions. Little by little, they’ll stop bottle or breastfeeding.

Here are some simple recommendations you should consider once you begin introducing solid foods to your baby:

Not all solid foods are good for babies

Some parents may be concerned if their baby doesn’t eat much solid food at the beginning. But it’s perfectly fine for a baby to eat four ounces at first so they can adapt.

Some of the foods you should avoid feeding your baby are canned foods, cold cuts, preserves, popcorn, and other foods they can choke on. It’s essential to evaluate the size of the bites to avoid accidents.

Always try to puree or mash the foods so they can easily swallow them. Don’t give your baby anything whole. Finally, don’t add salt or seasonings, as they aren’t necessary for their palate. In fact, they can even increase the risk of chronic diseases.

Weaning Your Baby: How to Start to Introduce Food
Weaning your baby is a crucial experience in your child's life. The process must be carried out with patience. Find out more here. Read more »
Link copied!
Interesting Articles
Babies
Discover Why Babies Stare