The immune system is your best ally when it comes to preventing illness. It has two components: innate immunity and acquired immunity. Today's article will discuss the second one, are you aware of how it works? 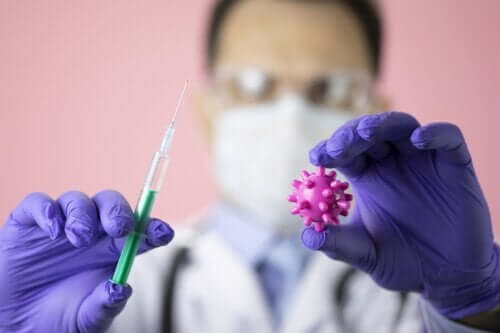 The immune system, both innate and acquired, is essential for optimal health. But what does acquired immunity consist of? How does it strengthen over time? Resolving these doubts is essential to enjoy a disease-free routine. Continue reading to find out more about it.

Symptoms such as ongoing colds, recurring fevers, and repeated bacterial infections can be indicative of a weakened immune system. According to the American Academy of Allergy, Asthma, and Immunology, more than three episodes of bacterial sinusitis or more than two antibiotic treatments annually, denote immune problems.

The human body presents containment barriers beyond the immune system. There are three types:

You may be interested in How does temperature affect the immune system?

As you can see, the acquired immunity system is defined as a set of highly specialized cells and systemic processes that eliminate or avoid pathogenic threats. This system is unique to vertebrates, according to this specialized volume on immunology.

Its function is to recognize germs in a specific way to be able to fight them quickly and more effectively. Though it may seem surprising, one can say this biological barrier has a memory, as the response to the same pathogen is increasingly powerful.

The effectors of this protection system are T lymphocytes and B lymphocytes (blood leukocytes). These are produced in the thymus and bone marrow, respectively.

The acquired immune system can’t be understood without the innate one. As various sources point out, it’s the cells of the innate system that process the antigens (substances of viruses and bacteria) and present them to the lymphocytes. It’s all so that they act accordingly.

So as not to complicate things, we’ll limit the importance of lymphocytes to the following:

Symptoms of a weakened immune system

As anticipated at the beginning, there are several signs that trigger suspicion when the acquired immune system isn’t working as it should. Some of them are:

In meeting these requirements, a patient must undergo an immediate medical check-up. The results will be looked at by an immunologist, who’ll diagnose the underlying reason for the immunosuppression.

How to get acquired immunity

As you’ve seen, the most effective way to strengthen this tertiary barrier is none other than exposure to pathogens. This doesn’t mean you want to get sick, because vaccines already serve this purpose.

According to the World Health Organization (WHO), vaccines are preparations with weakened or dead forms of harmful microorganisms that promote the stimulation of antibodies (receptors for the aforementioned lymphocytes) when introduced into the human body.

The acquired immune system responds to these stimuli as they destroy and remember the possible threats present in vaccines. However, these don’t cause real harm to the patient. Thus, when the actual pathogen is present, the lymphocytes will recognize it immediately before the infection begins.

To know more Is there a vaccine against pneumonia?

Things to keep in mind about acquired immunity

Acquired immunity is an extremely important tertiary biological barrier. This is because it repeatedly protects humans from countless pathogens. Thus, it’s essential to be familiar with the vaccination schedules in each country and region and to follow them accordingly.

Finally, vaccines don’t only protect us by encouraging the specialization of our acquired immune system. They also generate the kind of herd immunity that protects the weakest and sickest.

Weakened Immune System: What to Look For
Constant fatigue, colds, and sore throats can be clear symptoms of a weakened immune system. Therefore, it's important to be able to recognize signals from your body when this happens. Read more »
Link copied!
Interesting Articles
Anatomy and physiology
Characteristics and Function of Neurons

Anatomy and physiology
What's the Cause of Menstrual Cramps?

The cause of menstrual cramps is still a mystery for many women. This is because some of them go through…

Anatomy and physiology
The Symptoms of Andropause Every Man Should Know

Men also experience symptoms of something similar to a menopause, which goes by the name of andropause. They're similar processes…