Sinusitis Symptoms: From Origin to Diagnosis

Sinusitis is a completely curable disease, especially if it’s detected early. Nevertheless, it causes pain, difficulty breathing, and other kinds of discomfort 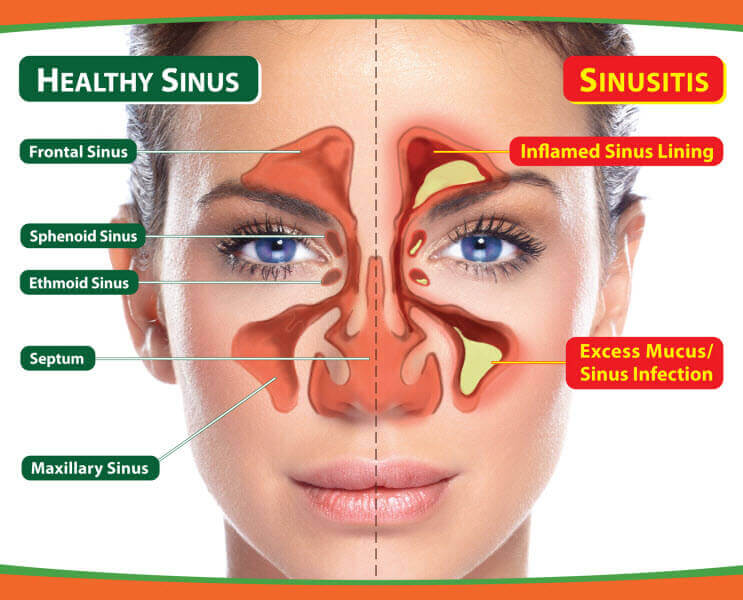 Sinusitis is inflammation of the paranasal sinuses. These are two small, hollow spaces through which air passes to circulate between the bones of your nose. There are several sinusitis symptoms to note.

The sinuses are divided into three groups: frontal, ethmoidal, and sphenoid and maxillary sinuses.

When everything is normal, the air moves freely through these cavities.

However, when the sinuses become inflamed, breathing gets more difficult and other sinusitis symptoms can arise, such as pain that can be very intense.

If your sinuses are healthy, there is no presence of bacteria or other organisms. In this case, mucus can flow in or out of your nose without a problem. When too much mucus builds up or there is a blockage of the paranasal openings, a breeding ground is created for various types of microorganisms. This can wind up causing sinusitis.

The origins of sinusitis

Too much mucus or a blockage of your paranasal openings can be caused by a variety of factors that lead to sinusitis symptoms. The most common ones are the following:

There are other risk factors that can contribute to the development of sinusitis or at least facilitate sinusitis symptoms. The main ones are: cystic fibrosis, hay fever or allergic rhinitis, a weakened immune system, adenoid hypertrophy, physical pressure or gravitational force, and finally, smoking.

Also, there are several types of sinusitis that can differ depending on how long they last. In total, four basic classes can be identified:

There are certain symptoms that are common to all types of sinusitis. The most important ones are:

Typically, a diagnosis is made based on a nasal exam. The doctor will shine a light in the area, looking for polyps or any signs of inflammation. It’s common to apply pressure on the area to check for the presence of pain. Pain can usually indicate whether it’s sinusitis or not.

To obtain the correct diagnosis, a doctor will usually order one or several of the following tests: a rhinoscopy, a computed tomography (CT) scan, or an MRI. X-rays rarely yield reliable results.

Additionally, a doctor can also order other complementary tests, including: nasal cultures, cytology testing, blood tests to evaluate the health of your immune system, and tests for allergies, ciliary function, or cystic fibrosis.

When sinusitis is treated early, the prognosis is generally very favorable. What’s more, if the proper treatment is obtained and the necessary care is maintained, a patient typically fully recovers. If there are recurrent episodes, it’s a sign that the cause of the disease hasn’t been correctly treated.

Complications of sinusitis are not frequent. However, if they occur, they must be taken very seriously. The most frequent complications are:

Additionally, Other less common complications are bone infections (osteomyelitis) and cutaneous infections in the area around the eyes. Any complications should be treated as soon as possible at a health facility.