You can find several types of sugar on the market. Because of this, some believe that some are healthier than others. What’s the difference between white, brown, and muscovado sugar? 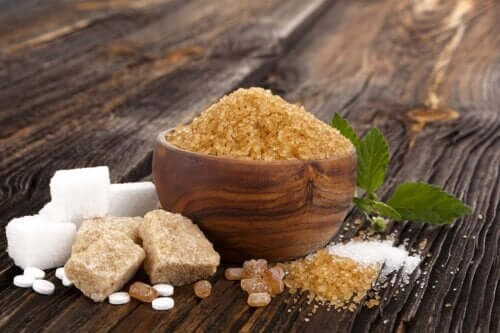 White, brown, muscovado sugar… Who doesn’t like the sweet taste of these ingredients?

Well, it isn’t a sin to confess that you like sugar. Most people do! When you taste it, your brain releases high doses of a neurotransmitter called dopamine, which is the neurotransmitter of pleasure and relaxation.

In fact, when your body doesn’t get enough of this neurotransmitter, depression could occur. However, that doesn’t mean that you should eat sugar in excess. As human nutrition experts of the Journal of the Faculty of Medicine stated, consuming too much sugar is harmful to health.

Thus, you should include it in your diet sparingly. The World Health Organization (WHO) recommends an intake of free sugar of less than 5% of total calories in adults. This is approximately 25 grams a day.

However, you must remember that this ingredient is found in processed foods, such as jam, candy, and drinks, among others. Also, regardless of its presentation, sugar is sucrose, even though it differs in color and flavor.

Below, we’ll talk more about this.

To understand the differences or similarities between white, brown, and muscovado sugar, you must first understand the origins of this natural sweetener.

The manufacturing process starts with cane juice or sugar beet. Manufacturers clarify and evaporate it until they get syrup or molasses.

Crystals are formed from this product. However, depending on their degree of processing or refining, they can be white, brown, or muscovado.

Are there any differences between these sugars?

Sugar is generally known as sucrose. This is because this carbohydrate is present in almost 100% of the product. According to the Spanish Food Code, sucrose is:

Sucrose forms from the union of two very simple molecules: glucose and fructose. Also, it’s the most used natural sweetener around the world and the most important from an economic standpoint. When we talk about white sugar, we’re referring to refined sucrose crystals produced from molasses.

Then, the manufacturers purify and subject this by-product to rigorous cleaning to remove all impurities. For this reason, it’s also known as “refined”. It tastes sweet and has a neutral odor and 99% sucrose purity.

Brown sugar can be whole or refined. The latter is obtained by adding molasses to the refined product to get a different color and flavor. In short, from refined to brown sugar, what changes is the color. It contains sucrose. It’ll be more or less dark depending on the amount of molasses added.

However, there’s another type of brown sugar, known as light brown sugar. It’s semi-refined, has yellow crystals, and is coarse. A partial separation of water from molasses and impurities, through a process known as centrifugation, yields it. This type of sugar contains 95% sucrose.

You should also read: 7 Ways to Reduce Added Sugar in Children’s Diets

Muscovado sugar originated in the 17th century. In Portuguese, the term was used for the poorest quality of sugar. However, far from this denomination, it’s actually obtained by traditional methods, but without the molasses centrifugation or separation processes.

The molasses crystallize very slowly. Then, they’re granulated and marketed as such. This sugar is also known as “raw sugar” and contains 97% sucrose. Also, it contains more water than refined sugar.

The main differences between white, brown, and muscovado sugar

To better understand the differences between these three products, we must start with the similarities. Firstly, they’re all made from the same raw material. In other words, sugar cane or sugar beet. Likewise, the main by-product in all three cases is molasses.

The cleaning and crystallization processes applied to the molasses will yield the different types. Paulina Obando, food technology specialist, states that their sucrose content is similar. It ranges between 95% and 99%.

Therefore, they contain approximately the same number of calories. One tablespoon of sugar contains approximately 60 calories. How do they differ? The answer is very simple. They vary in how the molasses is processed and, therefore, in their flavor and color.

To make white sugar, manufacturers evaporate, crystallize, and centrifuge the molasses before the refining process. It’s very sweet and its crystals reflect light.

To make brown sugar, manufacturers only mix the refined sugar with molasses to give it its characteristic brown color. But when the molasses is semi-refined and partially cleaned of impurities, a brown sugar with a slightly more intense color and caramel flavor is obtained (dark brown sugar).

The amount of molasses mixed with the crystals allows it to be classified as regular, light, or dark. All brown sugars are sweeter than white sugar, and dark brown sugar has a sticky, caked texture with a mild caramel flavor.

Muscovado sugar is when the molasses isn’t extracted from the sucrose crystals. Manufacturers simply evaporate and crystallize it before granulating it. This provides it a higher content of water and the natural minerals in cane, such as iron, magnesium, calcium, and potassium.

However, their concentrations are minimal. Thus, it’d be counterproductive to consume more than 100 g of muscovado sugar to reach daily nutrient recommendations. It’s darker and has a much more intense flavor than brown sugar.

Read on to learn more: Excessive Salt or Sugar Intake: Which Is Worse for Your Health?

What you need to remember about these types of sugar

The differences between these three types of sugar make it clear that none of them is better than the rest. They all contain the same amount of sucrose and calories, with only small variations between them.

The minerals in brown or muscovado sugar don’t represent an important nutritional value. Therefore, you must regulate your sugar intake, whatever the type, if you want to lead a healthier lifestyle.

How Sugar Affects the Brain
To date, it's been shown that sugar can be addictive and even trigger inflammation. Here, we'll explain how sugar affects the brain. Read more »
Link copied!
Interesting Articles
Nutrition
Nutritional Information and Health Benefits of Peas