When Vitamin K Is Prescribed and Why

Vitamin K is an essential nutrient that allows the body to function as it should. A deficiency of this vitamin can lead to bone problems, bruising, and bleeding. Learn more here. 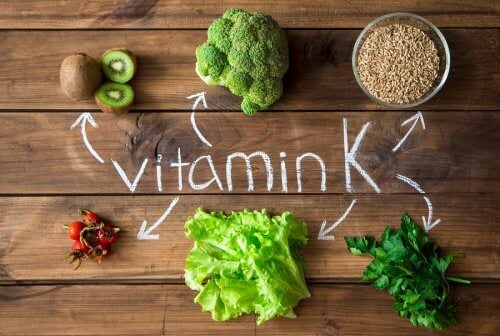 Vitamin K is an essential nutrient that plays an important role in blood stability and is a precursor of clotting factors.

We’ll tell you more about it in this article.

What Does This Vitamin Do?

This is a substance that, like any other vitamin, is required in small quantities for the body’s proper functioning and development.

This vitamin is a fat-soluble vitamin that the body stores in small amounts that quickly deplete, which is why you should consume it regularly. However, the body can also recycle small amounts for reuse.

Vitamin K plays a role in the production of proteins called “clotting factors.” Due to its important role, not consuming enough of it can have serious consequences, such as bleeding.

Also, vitamin K seems to play a role in the proper development of tissues and bones. That’s why not getting enough of it can cause bone development issues.

This article may interest you: 6 Vitamins You Must Have in Your Diet

Overall, there are three possible forms of vitamin K:

Green leafy vegetables are one of the richest sources of this vitamin.

Overall, eating a varied and balanced diet usually ensures that you’ll get enough of this vitamin. This is because your body only needs it in small amounts.

You can find it in:

Due to the fact that humans don’t need a lot of this vitamin, its deficiency is rare. However, it can happen.

This is the case of newborns, who may have bleeding problems and a tendency to bleed. This deficiency in newborns is due to the fact that this vitamin doesn’t enter the placenta easily. This is why they’re born with low levels. Also, breast milk doesn’t contain large amounts of the nutrient. Moreover, babies’ intestinal flora isn’t developed yet and, therefore, they have no bacteria to synthesize this vitamin.

Doctors usually administer them the vitamin through injection in these cases.

On the other hand, diseases such as cystic fibrosis, celiac disease, or short bowel syndrome can cause a deficiency. This is because such disorders generate intestinal absorption alterations that reduce the amount of vitamin K absorbed.

Likewise, treatment with certain drugs such as anti-convulsants or certain antibiotics can lead to a deficiency.

A severe deficiency can lead to bruising and bleeding caused by poor blood clotting. In the worst-case scenarios, this could lead to dangerous internal bleeding.

You can’t miss: The Risks of a Vitamin Deficiency

The consumption of blood-thinning medications may require vitamin K supplements.

Many vitamin complexes can increase your intake of this vitamin. However, there are also specific vitamin K supplements. You can also often find it combined with other nutrients such as calcium and vitamin D.

This is the most common way of administering this nutrient to patients who need it. However, the vitamin may also be administered through an intramuscular injection. This is the chosen administration method for newborns. This helps reduce the risk of brain hemorrhage.

Finally, in cases where anticoagulants such as warfarin are administered, a lack of vitamin K can be especially problematic. In such situations, periodic blood tests will be required to determine clotting time.

How Important is Vitamin K for Your Body?
Vitamin K plays an essential role in overall body health. Here is a list of foods that contain it, and reasons why it's so good for you. Read more »
Link copied!
Interesting Articles
Health
Strokes in Children