What You Need to Know About Zellweger Syndrome

Zellweger syndrome was described in 1964 and has been related to the presence of certain gene mutations. Read on to learn more about it! 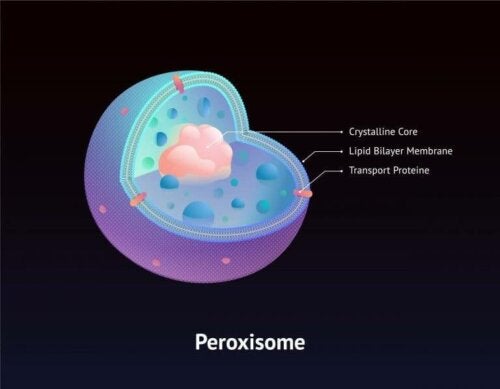 Zellweger syndrome is a disease that affects functions such as muscle tone or visual and auditory perception. In addition, it affects the tissues of the bones or organs such as the heart and liver.

Zellweger syndrome was described in 1964 and has been related to the presence of certain gene mutations. Read on to learn more about it! These mutations are transmitted by autosomal recessive inheritance. In other words, both the father and the mother must have the mutations in their genetic material.

Children diagnosed with Zellweger syndrome tend to die before they turn one. However, many of them die before six months.

This occurs as a consequence of liver, respiratory, and gastrointestinal system alterations. However, people with mild variants can live to adulthood.

Zellweger syndrome is part of a group of diseases that have the same genetic cause. This cause is peroxisome biogenesis disorders, also called Zellweger spectrum disorders. Peroxisomes are organelles that play a role in the proper functioning of some enzymes.

Currently, experts know that they aren’t independent alterations. It’s been shown that these are different degrees of severity of peroxisome biogenesis disorder.

Classic Zellweger syndrome is the most serious variant of peroxisome biogenesis disorders. However, cases of intermediate severity are called neonatal adrenoleukodystrophy. In this regard, the milder ones are known as infantile Refsum disease.

You should also read: What are Gene Mutations?

In Zellweger syndrome, alteration in the biogenesis of the peroxisome causes neurological deficits to occur. For this reason, there’s a wide variety of symptoms in different body systems and functions.

Here are the most common and characteristic symptoms of Zellweger syndrome:

The causes of this disease

Zellweger syndrome has been linked to the presence of mutations in at least 12 genes. Although there may be alterations in multiple genes, only one altered gene is enough.

In approximately 70% of cases, the mutation is located in the PEX1 gene. As we mentioned above, the disease is transmitted through an autosomal recessive inheritance mechanism.

This means that a person has to inherit a mutated copy of the gene from each of their parents to show the typical symptoms of Zellweger syndrome. When both parents carry the mutant gene, there’s a 25% risk of developing the disease. These genes are related to the synthesis and functioning of peroxisomes.

In this regard, peroxisomes are part of the cellular structures of organs such as the liver. This organ carries out very important functions, such as:

Treatment and management of Zellweger syndrome

Currently, no known treatment resolves the profound abnormalities that Zellweger syndrome causes. Therefore, the treatment of this disease is symptomatic.

Feeding problems are a relevant symptom, as they pose a risk of malnutrition due to the difficulty of swallowing food. Thus, the child may require a feeding tube to minimize development interference.

The treatment of this syndrome is multidisciplinary. In this sense, the treatment teams may include pediatric, neurology, orthopedic, ophthalmology, and surgery professionals.

Preimplantation Genetic Diagnosis
Preimplantation genetic diagnosis studies the ova and embryos, but for what purpose? In this article, discover the answer to this question. Read more »
Link copied!
Interesting Articles
Illnesses
Do You Know about the Genetic Basis of Cancer?