What to Do After an Asian Hornet Sting

An Asian hornet sting is severe in only a small percentage of cases. Nevertheless, it often causes severe symptoms. The danger is that anyone who has been attacked may have an allergic reaction, so it's important to be careful. 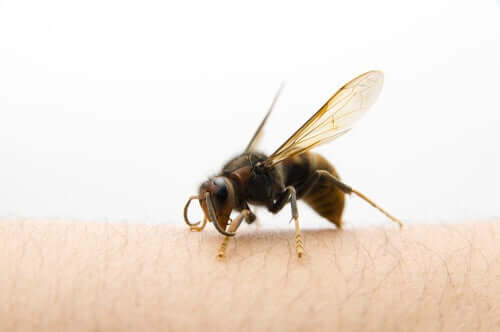 An Asian hornet sting is an insect sting that must be addressed carefully. In most cases, it doesn’t cause serious consequences. However, it can lead to death. In fact, some people have died from this sting.

The Asian hornet was first detected in Europe in 2004. It got its name because it comes from Southeast Asia. However, it’s also known as the yellow-legged hornet. It extended to other countries in the continent and reached Europe in 2010. There have also been some recent reports of it in the United States.

An Asian hornet sting inoculates more venom than a normal hornet sting. The evolution of the episode depends on the person who was attacked. If they’re allergic to these insects, the situation can be severe.

It’s important to note that an Asian hornet sting causes death only in 0.08% of cases. This is a very low rate. Nevertheless, it causes a more painful reaction than other hornets in all the people attacked by this species. This is because it’s bigger and has more venom.

The Asian hornet, whose scientific name is Vespa velutina, is an insect that can measure up to 1.37 inches. The most characteristic feature is its size and black body, which distinguishes it from European hornets. Unlike bees, hornets can sting the person several times.

The main risk of an Asian hornet sting is that it may cause an immune system allergic reaction. The complexity is that, in most cases, it can’t be previously known if this type of reaction will occur in a particular person or not. No tests can predict the allergy.

Effects of the sting

The first thing an Asian hornet sting causes is a sharp pain, similar to pricking a big pin. After that, the person may experience intense itching, similar to the itching a burn causes. Then, a big area of the skin swells up and the person can experience pain during 24 hours on average.

One of the risks is that these insects attack sensitive areas, such as the mucous membranes of the mouth, the eyes, or the nose. Also, keep in mind that Asian hornets release a pheromone from its stinger, which encourages the rest of the hive to attack.

If there’s an allergic reaction, there’s a risk for anaphylaxis between the 30 and 60 minutes after the Asian hornet sting. This reaction has four grades:

How to handle an Asian hornet sting

Asian hornets only attack if they feel threatened. Thus, you should avoid approaching the hive at all costs. Also, you shouldn’t attempt to kill or harm them when they appear. It’s important to be careful when you’re exploring in the bushes or places filled with accumulated wood. The best way to avoid problems is by preventing them.

Discover: The 5 Most Common Insect Bites and How to Treat Them

If an Asian hornet stings you, it’s advisable to apply a cold compress to the affected area. This will help reduce inflammation and pain. Also, you can apply vinegar compresses to get the same effects. If there’s a lot of discomfort, it’s advisable to apply a cream with corticosteroids and take oral antihistamines and, if necessary, oral corticosteroids.

You should also read: Allergy Tests: Types and Procedures

An allergic reaction to the sting is a medical emergency that must be addressed in the shortest possible time. If you have a history of this type of allergies, you should go to the hospital as soon as possible. The same goes when you detect a sudden reaction. Although only 3% of people are allergic, there’s no certainty whether you belong to that group or not.