What Is Papillary Edema or Papilledema?

Papilledema can cause double vision, blurred vision, or even momentary blindness. Here we'll explain why this condition associated with increased pressure inside the skull occurs. 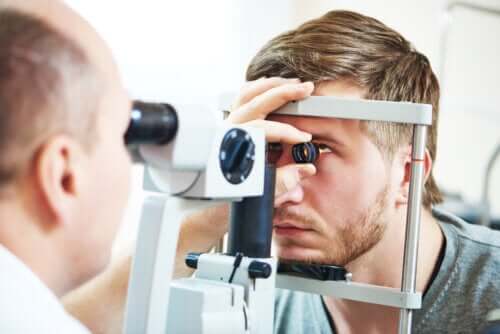 The papillary edema, also known as papilledema, is a pathology that occurs in the eye. It consists of an inflammation of the area of the optical nerve closest to the retina, due to increased intracranial pressure.

In some cases, this pathology is asymptomatic, while in others, it affects vision. The problem is that, behind this illness, serious health problems, such as brain tumors, may be hiding. Therefore, in this article, we explain everything you need to know.

What is papillary edema?

The papillary edema, as we’ve already mentioned, consists of the inflammation of the optical papilla of the eye. Most commonly, this occurs in both eyes at the same time, in the form of bilateral edema around the optical disc.

This pathology has its origin in intracranial hypertension. The skull is a fixed bone structure, within which we find different organs and substances. One of them is the cerebrospinal fluid. When something inside this box of bones increases in volume, it creates an increase in pressure.

So, papillary edema occurs when the intracranial pressure rises above 200 millimeters of water. This increase may be due to a mass or tumor. Or, on the other hand, it may be the result of an increase in the amount of cerebrospinal fluid.

Papilledema appears in the optical disc, in the fundus of the eye, visible by means of ophthalmological techniques.

As we’ve just pointed out, the cause of papilla edema is cranial hypertension. This increases due to the amount of cerebrospinal fluid or the presence of abnormal masses in the brain.

These two situations are frequent in different scenarios. When we speak of abnormal masses, we’re referring to tumors, abscesses derived from an infection, or blood due to a hemorrhage.

However, according to a study published in the Journal Neurology Supplements, the most frequent cause of papillary edema is idiopathic intracranial hypertension. This means that the pressure increases, but the underlying cause is unknown.

In other cases, it may be due to meningitis or encephalitis. An article in the Colombian Neurological Act affirms that it can also be a symptom of Wernicke’s syndrome. Other less common origins are the following:

You may be interested in: 6 Interesting Facts About the Human Brain

What are the symptoms of papillary edema?

The symptoms of papillary edema are variable. In the beginning, it’s often asymptomatic and specialists only discover it while performing a fundus examination. However, as it advances, the damage to the fibers of the optic nerve begins to produce evident signs.

In this sense, the papillary edema ends up affecting a person’s sight. Vision may become blurred, double, or even disappear completely for a few seconds. Many patients experience sensitivity to light contrast as well.

Most episodes of vision loss only last a few seconds. In addition, intracranial hypertension also produces symptoms of its own. For example, it often involves headaches, nausea and vomiting.

The headache is stronger when waking up in the morning and tends to improve during the day. In cases where meningitis is the cause, nuchal rigidity may develop behind the neck.

The treatment of papilledema

The main goal when treating papilledema is to eliminate the cause of intracranial hypertension. It’s important to keep in mind that this is a medical emergency. When the cause is idiopathic hypertension, the measures consist of reducing the cerebrospinal fluid.

In this case, according to the Chilean Magazine of Neurosurgery, doctors may prescribe diuretics like the mannitol or the furosemide. In addition, weight loss can be beneficial, as well as fluid and salt restriction.

To help the cerebrospinal fluid circulate properly, it’s also a good idea to elevate the head of the bed slightly. In the event that none of these measures work, surgery may be necessary.

The surgical approach consists of performing a lumbar puncture to help drain some of the liquid. Finally, if the cause is an infection or there’s an abscess resulting from bacterial colonization, the patient must receive antibiotics.

Headaches can accompany the signs of papillary edema and cranial hypertension.

What to keep in mind about papillary edema

What we must remember about papillary edema is that it’s a pathology that affects the optic nerve. It’s produced by an increase of intracranial pressure that responds to numerous diverse situations. However, most cases have one thing in common: An increase of pressure inside the skull.

One of the most frequent causes is idiopathic intracranial hypertension. However, brain tumors, hemorrhages, and infections are also triggers. Papilledema should be treated as a medical emergency to prevent irreparable damage to vision.

Ocular Migraines: How Can They Affect You?
Ocular migraines are a clinical type of migraine where there are vision problems. In this article, we'll tell you how you can recognize them. Read more »
Link copied!
Interesting Articles
Illnesses
Can Celiac Disease Cause Infertility?