What Is Glucagon? What Are Its Functions?

The main factor that regulates levels of glucagon in the blood is blood glucose level. When blood glucose is low, a signal is sent directly to alpha cells in the pancreas where this hormone is produced. 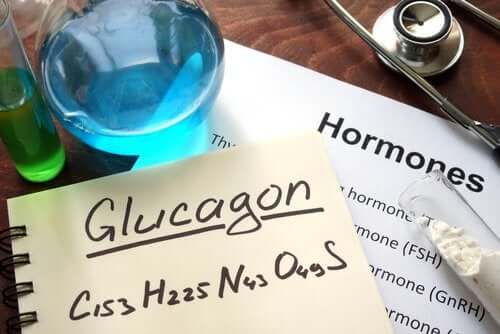 Glucagon is a hormone that the body naturally produces, specifically in an organ called the pancreas. Its main function is to increase blood glucose levels, which is the opposite effect of insulin.

Due to this property, as we’ll explain ahead, people who suffer from cases of hypoglycemia (low levels of glucose in the blood) widely use glucagon. Specifically, it’s used in cases where the patient has lost consciousness and is unable to swallow food.

Doctors advise all patients who suffer from diabetes to always carry a bottle of glucagon with them, especially those patients who are insulin dependent. Furthermore, they should teach someone close to them how to administer it so that they’ll know how in case of an emergency.

Glucagon’s functions in the body

Due to its mechanism of action, glucagon triggers a series of different effects and processes in the body’s organs. Among its effects, we’ll mention the following:

The main factor that regulates levels of glucagon in the blood is blood glucose level. When blood glucose is low, a direct signal is sent to the alpha cells, which are the pancreatic cells that synthesize this hormone. This action is blocked by the effect of insulin. Therefore, glucagon and insulin have opposite effects.

Other substances that also increase the secretion of glucagon are:

On the other hand, free fatty acids produce the opposite effect. In this sense, they have an inhibitory effect on the secretion of glucagon.

Also read: What Are The Differences Between Glucose and Fructose?

As you probably know, hypoglycemia is a disorder characterized by low blood glucose (blood sugar) levels. For many who suffer from diabetes, this means having a blood sugar level below 70 milligrams per deciliter. However, this number can vary, so you should consult with your doctor.

The symptoms of hypoglycemia tend to have a sudden onset, and can vary from one person to another. Additionally, different people can experience the same symptom to a different degree, and others will have no symptoms at all.

Among light to moderate symptoms of hypoglycemia, we’ll point out the following:

Moreover, if the case of hypoglycemia is severe, characteristic symptoms are:

You might enjoy reading: Tips on Improving the Health of Your Pancreas

Glucagon is a hormone that’s synthesized in the pancreas. Its main function is to increase glucose levels in the blood. If you’re diabetic, you should talk to your doctor about possibly taking a dose of this hormone with you wherever you go in case there’s an emergency situation and you need someone to administer it to you.

How to Improve Your Diet if You Suffer from Diabetes
Do you suffer from diabetes and want to change your diet to avoid health problems? In this article, discover the best tips. Read more »

Link copied!
Interesting Articles
Anatomy and physiology
The Causes of Bradypnea and its Treatments