What Does Viral Load Mean?

Viral load is a fundamental biochemical or infecological concept for evaluating the evolution of illnesses. Thanks to this study, scientists have been able to make advaces in the control of pathologies like AIDS and the current coronavirus. We'll explain what it means in the following article. 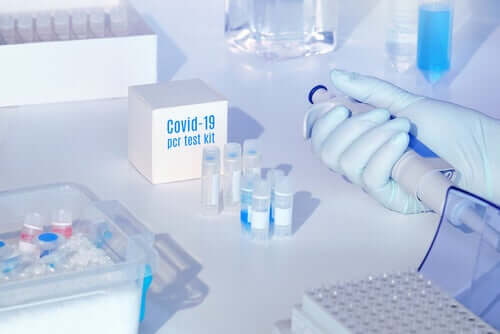 When we talk about viral load, we’re referring to a biochemical measurement employed in order to know how much of a virus is present in the body. This information is very important for specialties like infectology.

Thanks to viral load values, doctors can understand whether or not their therapeutic plan is working or not in patients that are ill because of a virus. This is why medical specialists around the world employ this technique.

This value is especially important when it comes to the virus that causes AIDS (acquired immune deficiency syndrome). The same is true for hepatitis C, for example, as well as another chronic condition that this virus causes. However, acute viral illnesses also require this measurement in some cases, which may be the case with the current coronavirus world outbreak.

Patients with weakened immune systems, due to their vulnerability, are also frequent candidates for this testing. Knowing the viral load allows for the early detection of infectious incipients that could put a patient’s health at risk.

In short, viral load refers to a numerical expression of the amount of virus present in a bodily fluid. It’s an estimate, rather than an exact measurement, but it reveals the number of viral particles per millimeter of fluid. For example, in blood.

Viral load over the course of infection

In all infectious diseases, the circuit of the virus’s propagation within the body is similar. The cell that the virus attacks at the beginning can vary, but the mechanism tends to be the same.

A virus enters the human body, seeks out and penetrates the target cell, and uses its metabolism to create more copies of itself. The viral particles multiply and the body tries to defend itself against the attack, setting off an internal battle. At the same time, the virus continues to infect cells and destroy those that it uses.

At some point in the battle, there comes a balance, and then, this balance tips in favor of one or the other. On the one hand, if the immune system successfully battles the virus, the body will recover from the illness. Of course, this doesn’t rule out the possibility of certain long term consequences. On the other hand, if the virus is more capable, it will survive the battle and may even cause the death of the patient.

What the viral load measures is how many copies of a virus are present at any given moment. If the viral load is high, it means that the period of infection is very active and particles are multiplying.

Keep reading: A Study Confirms Three Types of Coronavirus in the World

The use of PCR testing to measure viral load

The most common test that laboratories use in order to determine a patient’s viral load is the PCR test. These initials stand for polymerase chain reaction.

This test allows scientists to take a very small portion of DNA or RNA and multiply it in order to measure it. Basically, the test replicates genetic information in order to have a greater volume, making measurement possible.

PCR testing dates back to 1986 and quickly became famous. Today, almost every country in the world has infrastructures for carrying out various PCR at a decent speed.

The polymerase change reaction isn’t just useful when it comes to quantifying a viral load. It has several very different uses, such as medical forensics, for example. This chain reaction makes it possible to obtain a large number of copies of DNA from a small fragment. Therefore, several fields of medicine besides microbiology make use of this technique.

Why is viral load important?

The illness COVID-19 is a predominant topic in the news today. Therefore, we can use it as an example of how to evaluate the uses of viral load. Another illness where the use of viral load is very beneficial is AIDS.

According to scientific studies, the viral load of the coronavirus infection peaks around day 5 or 6 after the patient becomes infected. This serves as a warning in regard to contagion, especially in hospitals. That’s because it’s the moment when patients are most likely to go to the emergency room or be hospitalized.

In the same way, even though the illness tends to be benign in children, they have high viral loads. This means that they are major carriers and transmitters of SARS-CoV-2.

In the case of AIDS, a patient’s viral load helps infectologists determine the course of treatment. In other words, what antiviral medication a patient should take, what dose, and for how long. At the same time, doctors can evaluate if treatment has been effective or not. The objective, of course, is to reduce the viral load to safe values, according to protocol.

In conclusion, viral load is a laboratory technique that’s here to stay. It’s relatively young in the field of research, but it’s more than clear how useful it can be. The more specialists use this technique around the world, the better we will be able to control infectious diseases like HIV and coronavirus, for example.