What Are Unity Coins in Marriage

One of the unique moments of certain traditional weddings is the exchange of unity coins. However, its meaning is very different from what it was at the beginning. Continue reading to learn about the history and tradition behind this custom. 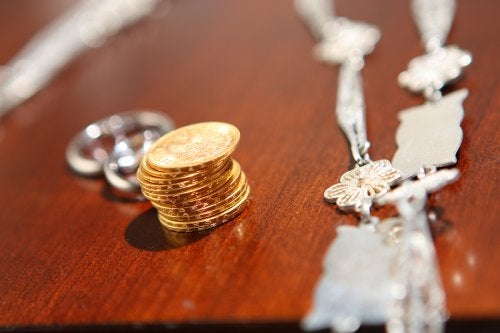 Weddings are full of symbols that represent promises, desires, union, and delivery. One of them is unity coins, which are considered to be a representation of material and spiritual prosperity in a married couple.

Unity coins are full of meaning that go beyond the simple act of exchanging a few coins. Through using unity coins, the groom hands over his wealth to his bride and then she returns them back to him. Also, doing this act, the couple receives the blessing for the marriage and offspring.

Just as a ring symbolizes the alliance, unity coins represent the act of sharing everything from that moment on. “What’s mine is yours and yours is mine.” Unity coins also represent a desire for future wealth.

What Are Unity Coins?


Unity coins represent the union between a married couple. “Yours is mine and mine is yours.”

Unity coins consist of thirteen coins, 12 that are gold and one that is silver, which a child brings to the altar in a basket. After the ring ceremony, the best men give them to the groom and bride.

They are usually a gift from the bridesmaid to the groom, but this is a more modern tradition.

There are also people who seek different symbols that are different from coins, such as jewelry, flowers or a candle. In some cases, the couple chooses coins from a different country that has a special meaning to them, either because their family is from there or they plan on living in the future.

You can also exchange unity coins in legal marriages, although, in this case, without the blessing of a priest.

Read this article, too: How to Choose the Best Season to Have Your Wedding

The Exchange of Unity Coins

After exchanging rings, the priest blesses the unity coins and then the groom hands them over to his bride with the following words: “Receive these coins as a pledge of God’s blessing and a sign of the assets we’re going to share as a couple.”

Then, the bride hands them back over to the groom with the same words. Finally, at this point, the priest blesses the couple and their assets.

The word arrhae, or unity coins has a long path of evolution that begins during the paleolithic era of the Syrians. At that time, 1400 AC, the Erabatu consisted of the tax rates paid by families. The word evolved into Greek Arrabon, which was a garment that was left as a guarantee of purchase.

At the time of the Roman empire, they knew it initially as arrhabo. In the texts of Plautus during the 2nd Century BC, Arrhabo was a promise of payment that was deposited as a guarantee. Later, Gaius Pliny, procurator of Rome from 70 to 72 AD, was already using the word arrhae, when referring to the guarantees of business.

In ancient Rome, the word “Arrabon” was also used as slang for pimps. It was used when they received the payment for favors from the prostitutes they controlled.

Unity Coins in the Middle Ages


During the Middle Ages, marriage was signed as a purchase and sale that had a dowry.

Arrhae was used as a commercial term during the high Middle Ages in Spain during the time of the Visigoths. This term was used in purchase and sale contracts for the deposit that the buyer left as collateral prior to purchase.

Within these commercial contracts, they covered when a father would hand over the bride to the groom.

At the beginning of the Middle Ages, marriage was a legal commercial agreement embodied in a contract. The father of the bride agreed to give custody of his daughter to the suitor in return for a dowry.

This document was called Desponsiato (where the word engagement came to be). At the same time, an arrhae certificate was signed, which specified the assets that were transferred to the bride. This was done without the consent of the woman, who was usually under the age of 18. Many times the future husband didn’t even know.

After the Desponsiato contract and arrhae certificate, when the woman was of age to bear children, the wedding was then celebrated. Over time, this ceremony became a religious act due to the influence of the church.

As of that moment, unity coins remained as part of the tradition.

Check out: 8 Things You and Your Partner Should Know About Love and Marriage

In the tradition of the Catholic Church, unity coins come from the Old Testament. Abraham gave Rebekah gold vessels, garments, and gold earrings as a sign of entering into a marriage with his son Isaac, according to Genesis.

This is why in weddings the priest says: “The omnipresent God that ordained Abraham, thy servant, to give the arrhae to Isaac and Rebekah as a sign of holy marriage”.

The origin of the 13 unity is unclear. The Letters of prelates and priests of the 19th century said that the number is implicit in the Old Testament. The explanation is that Jacob, son of Isaac and grandson of Abraham, had 12 children who founded the 12 tribes of Israel. Therefore, the 13 is 12 plus one, which includes God.

Others believe that it comes from Arabic tradition. It’s a currency for each month of the year, plus a bronze coin for the poor to distribute the abundance.


Despite tradition, you can also choose an option that’s more personal that represents your values.

Now that you’ve learned all about unity coins, you now know that they are a very important part of some traditional weddings. That’s why you should choose them well and give them a special meaning.

Most jewelry shops have different types of unity coins. However, you can also be original and get ones that represent your values.

Relationships
How to Put an End to a Toxic Friendship