What are the Effects of Gluten on the Body?

The consumption of gluten can lead to complications in some people who either have celiac disease or are sensitive to it. Today's article will discuss the effects of gluten on your body. 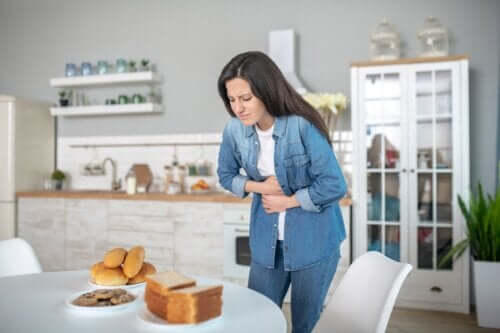 Some people have a gluten intolerance due to the effects this protein has on the body. However, the symptoms vary from person to person. This is why everyone should be aware of the possible consequences of this substance.

Researchers have identified several conditions associated with the intake of this substance and the most common ones are celiac disease and gluten sensitivity. The body reaction has to do with the activation of the cells of the immune system.

What exactly is gluten?

Gluten is a protein that’s not present as such in food but forms when oats, rye, barley, and wheat come into contact with water. The latter is the one with the greatest capacity to produce it.

Wheat has been part of the Western diet as a staple food for about 10,000 years though. However, the food industry has genetically modified it, making it increasingly resistant to pests and weather conditions.

It’s precisely due to this that its consumption increased progressively. Actually, it’s because its viscosity and elasticity made it a remarkable ingredient not only for junkie industrial pastries but also as a food additive.

Thus, it promoted the overexposure of the population to gluten and associated diseases arose as a consequence. Also, research determined that genetic predisposition plays an important role in the development of gluten intolerance.

Look at The Health Implications of a Gluten-Free Diet

Effects of gluten on the body

Scientific evidence shows that people with gluten disorders often present gastrointestinal and extra-intestinal symptoms. In turn, the damage to the intestinal villi leads to further consequences.

Its most common clinical manifestations include:

Other complications associated with gluten

According to a study published in the Journal of Internal Medicine, it’s common for children not diagnosed with celiac disease to show an inability to gain weight, anorexia, vitamin deficiencies, and tooth enamel defects, in addition to the above symptoms.

The article also demonstrates that in adolescents and adults the manifestations tend to be more atypical. In general, the symptoms are nonspecific and may even appear to be unrelated to digestive system problems.

According to the Guidelines of the World Gastroenterology Organization, the continuous intake of foods with gluten can lead to other problems, such as:

Similarly, it appears that people with long-term untreated celiac disease are at increased risk for complications such as intestinal cancer, malignant lymphomas, oropharyngeal tumors, and bone fractures.

Elimination of gluten from the diet

Science backs the fact that the best treatment for any gluten intolerance is a gluten-free diet for life. Thus, they must eliminate any products made from wheat, oats, rye, and barley (TACC). Also, you must keep in mind that many types of processed food could contain them.

For instance, there could be gluten in some types of ice cream, sauces, salad dressings, beer, and even in beverages and some medications. Fortunately, most products these days label products as “Wheat Free” and “Gluten-Free.” They implemented such logos several years ago to identify gluten-free products.

Even so, you must take into account that meats, fruits, vegetables, or other foods could be contaminated by the mere fact of being in contact with gluten. Thus, you must be aware of what you buy.

See also Is it Right to Include Gluten-Free Products in Your Diet?

Anyone who follows a strict diet, whatever it may be, must ensure it’s balanced. When looking for alternatives for wheat, there are some great options such as:

As usual, consult a doctor or nutritional professional if you have any questions. They should be able to help you design a proper diet just for you after evaluating your particular case.

What to remember about the effects of gluten on the body

Finally, it’s important to remember that the effects of gluten on the body are many and varied. While some people can digest it, others are allergic to it and become sick after ingesting it. It mainly affects the digestive system.

Thus, consult a doctor if you have any symptoms of intolerance so they can make a proper diagnosis. Keep in mind you’ll have to adjust your diet if they confirm a gluten intolerance or celiac disease.

Neurogluten: Gluten and Neurological Diseases
Gluten promotes a state of inflammation in people with altered sensitivity to protein, which can cause neurological diseases to appear. Read more »
Link copied!
Interesting Articles
Illnesses
Hepatitis in Children: What You Need to Know