Today, scientists are trying to discover other antiparasitics with fewer adverse effects and that fight the development of parasite resistance to commercial drugs. Read on to learn more about antimicrobials! 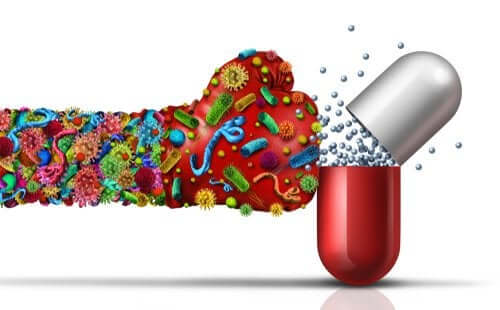 Throughout this article, we’ll take a look at the different types of antimicrobials, their uses, and their main characteristics.

Overall, these drugs can be classified based on two aspects:

Classification of antimicrobials according to their mechanism of action

First, according to this classification, we can distinguish the following antimicrobials:

Let’s take a look at all three of these.

Sterilizers are capable of killing any type of microorganism. Two of the best-known sterilizers are glutaraldehyde and ethylene oxide.

Moreover, physical methods such as heat, filtration, and ionizing radiation are also used for this purpose.

Read on: Do You Know the Best Natural Antibiotics?

Next, doctors use disinfectants to kill microorganisms on inert materials. This is due to the toxic effects they usually cause on living tissue. Overall, some of the most-used disinfectants are alcohol and iodine compounds such as Betadine.

Both of these have similar uses. However, one difference between them is that antiseptics are applied directly to damaged tissue to prevent microorganism growth. On the other hand, they administer chemotherapeutics intravenously.

Classification of antimicrobials according to the type of microorganism

Below, we’ll classify antimicrobials according to the microorganisms they act against.

The term antibiotic refers to a chemical that kills or inhibits the growth of certain types of sensitive microorganisms.

As their name suggests, doctors use antibiotics to treat bacterial infections. Medical professionals use these drugs both in veterinary and human medicine. Plus, they do this along with antiparasitics and other antimicrobials. Overall, the goal of treatment with antibiotics is to kill the microorganism.

Finally, it’s important to mention that self-medication with antibiotics is a serious public health problem. The reason for this is that bacteria are able to develop resistance mechanisms to different antibiotics. Thus, the initially effective treatments fail to work and the antibiotics become ineffective.

These are also called antimycotics. Overall, they’re substances that stop the growth of or kill certain fungi.

Like antibiotics, many people self-medicate and abuse these drugs. Unfortunately, this causes microorganisms to develop resistance against common drugs.

Here are some of the best-known antifungals:

Next, these antimicrobials are used both in veterinary and human medicine. They fight infections caused by bacteria and parasites. Plus, they also use them for the treatment of some types of cancer.

Overall, the best-known antiparasitics are anthelmintics and antiprotozoals, such as:

Today, scientists are trying to discover other antiparasitics with fewer adverse effects. In addition, they’re also trying to fight the development of parasite resistance to commercial drugs.

Discover: A Milk and Mint Remedy to Fight Intestinal Parasites

Next, medical professionals use these drugs to treat viral infections. Unfortunately, they aren’t able to cure the disease. However, they can alleviate the symptoms.

Thus, they’re able to reduce the severity of symptoms and the likeliness of suffering complications. Overall, antivirals exist for each type of virus. However, doctors have to prescribe them to patients.

Overall, antimicrobial substances are capable of inhibiting the growth of or killing various microorganisms. Doctors use one type or another depending on the particular infection and situation.

Microbial drugs (antibacterials, antifungals, antiparasitics, and antivirals) aren’t available without a prescription. Therefore, self-medicating with these types of drugs favors the development of microorganism resistance. Thus, it can make treatment less effective for everyone.

Broad-Spectrum Antibiotics
Have you ever heard about broad spectrum antibiotics? If not, here in this article you can learn about their functions and resistances. Read more »
Link copied!
Interesting Articles
Medication
Trastuzumab: Therapy Against HER2 Positive Breast Cancer