The Warning Signs of Appendicitis

Although some of the symptoms and warning signs of appendicitis can be confused with other ailments, it's really important to know how to identify them and act quickly to prevent appendicitis from becoming peritonitis. 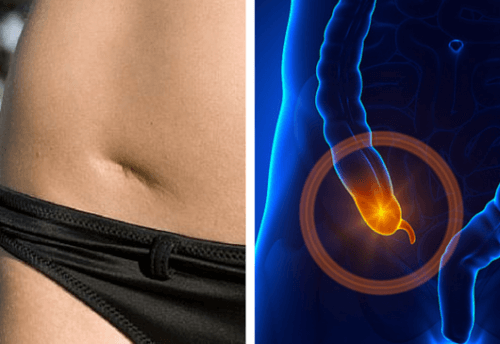 Early detection is key for treatment, which is why we’d like to share the most important warning signs of appendicitis with you in this article.

The appendix is a worm-like tube measuring about a half inch wide by 4-6 inches in length. It’s located at the beginning of the large intestine, at the bottom of the abdomen, in a region referred to as the lower right quadrant.

For a long time, this organ was thought to be useless as its function wasn’t known beyond the damage to the health it causes when it becomes inflamed from appendicitis.

However, several studies have discovered that it possesses a type of immunological function as it forms a part of the lymphatic system, a network of lymph nodes with special vessels that transport lymph throughout the body.

The cause of the inflammation of the appendix isn’t known. But it’s thought to be the result of a blockage by fecal matter, a foreign body, or in rare instances, a tumor.

What’s most worrying to health experts is that many people aren’t aware of warning signs of appendicitis, which leads to some cases only being detected after the disease has reached a very serious stage.

Here are the common warning signs of appendicitis to watch out for:

Pain around the navel

One of the first symptoms experienced when the appendix is inflamed is a heavy sensation of pain around the navel or in the area known as the “mouth of the stomach” that’s often confused with a common stomach ache.

However, the pain is progressive and continuous to the point that the patient will realize that it isn’t a normal stomach ache.

It’s likely that the pain will intensify upon coughing or applying slight pressure.

To check for appendicitis, gently apply pressure to the painful area with the index and middle fingers for two minutes. If it’s appendicitis, you’ll more than likely feel pain or respond with a scream.

Also read: Caring for Your Stomach and Preventing Disease

When the appendicitis is acute, the person will generally walk hunched over and not be able to move well. When trying to walk erect, the pain intensifies and warns that something isn’t right.

The majority of people who have appendicitis prefer to rest in bed to relieve the pain.

Other tests consist of jumping or coughing to see if the pain intensifies. In fact, this is the first step doctors use to make a diagnosis.

Fever is the body’s immune response to different health problems and in this case, it should be considered a warning sign.

As the infection progresses, the body presents more symptoms like nausea and vomiting.

However, as with the above case, both symptoms can also be the result of other health problems, as is the case with gastrointestinal diseases.

Pain while defecating? The late symptoms of appendicitis can include changes like constipation or diarrhea, due to the inflammation in the digestive tract.

This symptom along with the others already mentioned can be another one of the warning signs of appendicitis or related issues.

In general, affected people have difficulties eating normally. The change can be so sudden that it will be obvious that it’s not a stomach infection or virus.

Check out this article: Control Your Appetite Naturally!

What are the complications?

Ignoring these warning signs of appendicitis can contribute to the disease’s progression and lead to a serious stage.

The worst complication is that the untreated inflammation can damage the organ and the infectious material can cause peritonitis, which can be fatal.

It can also lead to the formation of a fistula, an abscess or an infection.

Symptoms of Appendicitis in Children
The most common symptoms of appendicitis vary by age but any doctor will be able to correctly diagnose it and decide whether or not to perform surgery. Read more »
Link copied!
Interesting Articles
Illnesses
What Causes Yellow Skin on the Bottom of the Feet