Virchow's triad is a medical term that puts together three factors that affect clotting and thrombus formation. The worst consequence is venous thromboembolism. 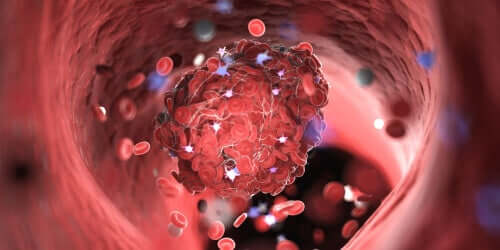 Virchow’s triad is a series of 3 changes that happen inside the veins, which determines the formation of venous thrombus. This is also called venous thromboembolism.

A German pathologist called Rudolf Virchow first described this triad more than 150 years ago. He described, for the first time, the conditions necessary for venous thrombus to form and spread.

We will begin by describing Virchow’s triad, and then several definitions that will allow us to understand venous thrombosis and its health risks.

What does Virchow’s triad describe?

There are situations known as prothrombotic states that favor the appearance of the triad. Once they’re united, they accumulate platelets in the form of traps that retain neutrophils. Platelets, along with neutrophils, will also form venous thrombus and lead to thromboembolism disease.

Prothrombotic states: what are they?

We either inherit or procure prothrombotic states, where Virchow’s triad has many chances to appear. They can be from modifiable and non-modifiable risk factors.

Genetic mutations for example, when they involve clotting factors, can lead to a prothrombotic state. This inheritance is difficult or impossible to modify, since we’re at risk from the very moment of conception.

On the other hand, there are systemic diseases that stimulate blood clotting, such as cancer, arterial hypertension, nephropathies, and chronic venous disease. People with varicose veins and venous insufficiency are particularly susceptible.

Habits and lifestyle are also important in the thrombus equation. Obese people and smokers are at high risk. Those who need to travel for long periods by plane, immobile, can also increase their risk of clotting in their legs.

For women, using estrogen in hormonal contraceptives deserves special attention. A doctor should always evaluate the risk of thrombosis, before indicating such contraception. And during pregnancy, the pressure of the uterus on the veins that go toward the lower limbs slows the circulation, also favoring Virchow’s triad.

Other associated situations include:

This may interest you: Venous thrombosis due to contraceptives

What is venous thromboembolism?

Venous thromboembolism groups two entities that can cause vascular disability and death. They’re the most common preventable cause of death in hospitalized people:

Venous thrombus may stay put or it may also travel through the bloodstream. If the detachment occurs they’ll become emboli, and, if they reach the heart, they’ll go into the pulmonary circuit.

Thrombosis of the lower limbs is the most frequent. It shows itself with a redness in the area, hypersensitivity to touch, local heat, cramps, and also pain.

If a thrombus forms and pulmonary thromboembolism is generated, the symptoms are shortness of breath, syncope or fainting, hypotension, and cyanosis (bluish skin coloring). The consequences are fatal if not treated quickly and effectively.

How to diagnose Virchow’s triad problems?

Firstly, the common way to diagnose deep vein thrombosis is through Doppler ultrasound of the deep venous system. The doctor will examine the presence of blockages in the blood flow or assess the loss of compressibility of the veins.

In cases that are difficult to diagnose, or in uncertain cases, we can undergo computed tomography or nuclear magnetic resonance imaging of the suspected limb.

For pulmonary thromboembolism, the primary diagnosis method will be computed tomography of the lung. Sometimes, the preferred method is pulmonary scintigraphy, which is a diagnostic study.

See also: Deep vein thrombosis: How to detect and prevent it

Why is Virchow’s triad important?

Because we know more about blood clotting and Virchow’s triad, cases related to thrombus and emboli hospitalizations have decreased. At any rate, we can prevent even more deaths from these causes.

Maintaining healthy living habits and caring for our limbs is also essential to reducing the risk of hypercoagulation within the blood circulation. Talk to a doctor if you have questions about the steps you can take to protect yourself.

Chronic Obstructive Pulmonary Ddisease (COPD)
Chronic obstructive pulmonary disease generally affects people ages 35-40, but it is often not diagnosed until the person is over the age of 50 years old Read more »
Link copied!
Interesting Articles
Illnesses
The Connection Between Erectile Dysfunction and Diabetes