Varieties of Vegan Cheeses and Their Benefits

Vegan cheeses are made from vegetable products. They’re usually organic and involve the consolidation of protein mass from different sources such as soy, solidified vegetable oils, nutritional yeast, or grains. 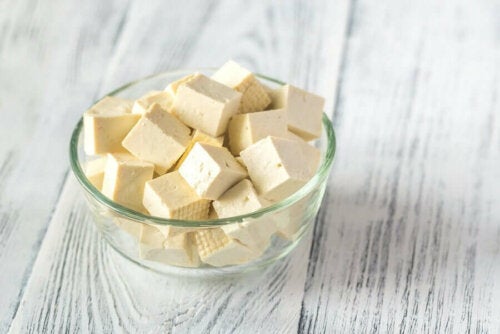 Have you ever tried vegan cheese? Do you think it could have more benefits than milk derivatives? Then read this article and we’ll tell you more about the varieties of vegan cheeses.

What is vegan cheese?

Cheese is a very popular food. There’s a huge variety and endless options to choose from. However, many people have had to stop eating it because of medical conditions, like lactose intolerance or allergies to milk protein.

On the other hand, other people have opted for a lifestyle without dairy products, such as vegans, whose numbers have increased in recent years at a global and local level.

The traditional types of cheeses we know are made from casein, a type of milk protein from animals such as cows, goats, and sheep. During production, a group of enzymes that an animal’s stomach produces, known as rennet, is added to milk.

On the other hand, vegan or vegetable cheeses are made from plants, usually organic, and involve the consolidation of protein mass from different plant sources, such as soy, solidified vegetable oils, nutritional yeast, and grains.

As this type of cheese doesn’t undergo the natural maturation process of proteins, it doesn’t have the same flavor profile as a dairy cheese that has been matured.

As we have seen, vegan cheeses have their characteristics that make them different from animal cheeses. But, also, they have several outstanding benefits that make them an ideal food to include in any type of diet.

You might want to read: Healthy vegan cheese with oregano

The first is made from tofu which is also called vegan cheese. It’s just fermented soy. This fermentation gives an appearance of fresh vegan cheese with a high protein level.

Then, there are cheeses based on coconut fat and starch (usually potato). These cheeses get the characteristic texture of animal cheeses.

And finally, there are cheeses made from nuts. The two most commonly-used nuts are cashews and almonds. As a disadvantage, it’s very difficult to mask the flavor of cashew or almond, but if you ignore this fact, you’ll have very original flavors.

Also read: Soy protein: Is it good or bad for your health?

In Spain, the variety of animal cheeses is innumerable, with more than 200 options. Vegan cheeses have been with us for only a few decades, but the varieties are growing. Below is a list of vegan cheese varieties you can taste:

Where can you find them?

Vegan cheeses are on sale in “vegan-friendly” food stores and health and ecological food stores, as well as in vegan fairs and restaurants.

Finally, if you want to make yourself a delicious vegan cheese, below we tell you how to do it.

Three Delicious Recipes for Vegan Cheese
These recipes for vegan cheeses are tasty and they're easily made with a wide variety of ingredients of vegetable origin. They're also low in calories and, as if that wasn't enough, they're also a great alternative for those who are lactose intolerant. Read more »
Link copied!
Interesting Articles
Nutrition
The Reasons Why Some People Are Always Hungry