Uses and Side Effects of Methylprednisolone

People who take Methylprednisolone, or any steroid, over a long period of time and in relatively high doses must keep in mind that suddenly abandoning treatment after using it can have a negative impact on their health. 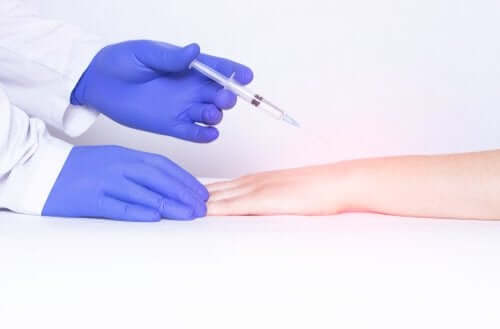 Methylprednisolone is a synthetic derivative of cortisone, which means that it shares part of its pharmacological properties — such as its anti-inflammatory action.

However, this drug has some advantages over cortisone. For example, it doesn’t significantly alter glucose or protein metabolism, nor does it modify the electrolyte balance.

Methylprednisolone belongs to the glucocorticoid family. It’s a group of substances with powerful effects on the body: the suppression of the immune system and the anti-inflammatory power, among them.

This drug has been marketed under different pharmaceutical names and people can administer it through different routes:

This drug is used for treating severe allergic or inflammatory reactions. This treatment is, therefore, aimed at patients in whom other therapies have either failed or haven’t been too effective.

In addition, doctors administer methylprednisolone when a patient requires an immediate dose of steroids. Usually, they opt for intravenous or intramuscular administration in these cases.

Some emergency situations could be an anaphylactic shock or an acute asthma attack. However, doctors also prescribe it for the treatment of autoimmune diseases or during severe outbreaks of them.

They also prescribe it for the following pathologies:

What’s the effect of methylprednisolone in the body?

The way to trigger it is hormonally. The drug, after being absorbed and transported by the blood system, reaches the cell membranes and can then interact at various levels.

As for the anti-inflammatory effect, it inhibits the synthesis of proteins involved in this process, enhancing the body’s natural response to situations of stress that require a quick response.

Learn How to Apply Topical Corticosteroids

Side effects of methylprednisolone

It’s important to keep in mind that this drug can have considerable effects on our body when used over a long period of time and in relatively high doses.

So, you shouldn’t suddenly abandon the treatment. This is because the sudden interruption of a steroid-based treatment can have serious consequences and even lead to death.

Aside from this, methylprednisolone, like any other drug, produces side effects people must take into account when using it. Some of the adverse reactions are:

There are some psychological side effects as well. For instance, methylprednisone belongs to the family of steroidal anti-inflammatory drugs so it’s more likely to trigger some type of alteration of this type, especially mood changes.

Some of the other psychological symptoms are:

Find out Everything You Need to Know about Cortisol Excess

Methylprednisone belongs to the family of corticosteroids and is subject to medical prescription due to its powerful effects. Thus, you should always follow the guidelines indicated by your doctor and tell them and your pharmacist about any new symptoms you may be experiencing.

In addition, it’s extremely important to gradually stop taking this type of drug, as a sudden withdrawal could be fatal.

Corticophobia or Fear of Corticosteroids
The fear of corticosteroids has been increasing for the past few decades. These medicines can have various important side effects, but they often happen when you don't take the correct dose, or you use them for a prolonged period. Read more »
Link copied!
Interesting Articles
Medication
Tretinoin and Acne: Warnings and Uses