Different types of scars that can occur on the skin determine the final state of a wound. Want to know more about this healing mechanism? Here's what you need to know about dermal scars. 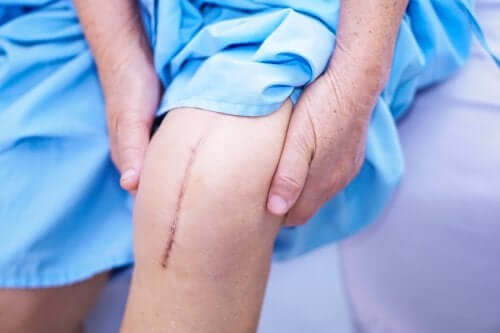 The skin can heal in different ways, because not all wounds are the same. How the injuries are caused can either produce deeper or more superficial wounds. This is what determines the different types of scars that form on our bodies.

The intermediate layer of the skin is the dermis and it can produce pathological scars when it’s affected by a wound deep enough to penetrate it. The dermis is a highly specialized tissue, and hence the difficulty when trying to repair it.

First, let’s see how the skin reacts to a wound to produce a scar, and then we’ll talk about the different types of scars.

When the skin is wounded, it triggers a series of successive phenomena to repair it. The way these phases are carried out is what determines the types of healing. There are five phases of healing:

As soon as the injury occurs, the blood washes the wound. Foreign bodies are dragged out of place to avoid infection. Then, with the help of platelets, the vessels are closed to clot and stop bleeding.

The second phase is the inflammatory one. Although the skin becomes red, this isn’t an indication of an infection. The redness of the inflammation is from intense cellular movement and increased blood flow. A clear inflammatory fluid may even form in the wound, which isn’t a sign of infection either.

Now the essence of the repair begins. The cells that are most involved are the fibroblasts, which travel to the site of the injury to produce collagen. Collagen is the main component of the dermis; therefore, it’s the one that replaces the lost tissue.

A final function of wound repair is to restore the layer that separates the external from the internal. The skin has its barrier function thanks to the epidermis. Epithelialization consists of re-forming epidermis that disappeared through cells called keratinocytes.

Once the wound closes, the body’s healing process defines the scar’s final aspect. If the wound only affected the epidermis, there’s usually just cell regeneration and the scar is usually normal. On the other hand, if the wound was deep, there’s a greater possibility of having a pathological scar.

Skin healing phases are always the same in all wounds, but not all wounds are the same. That’s why three types of healing processes have been identified in the world of dermatology and surgery:

This is the process that occurs when the wound is small; it isn’t deep and the edges of the wound are close. It doesn’t usually leave a long-term scar.

This is the healing process of a deeper wound which affects the dermis. The result is usually a larger than usual scar with a striking appearance. The main cause is the loss of substance or the existence of a very large distance between the edges of the wound. When that happens, the dermis must form a lot of new tissue in the granulation stage, and that’s the reason for the final scar.

You may be interested in: 4 Natural Home Remedies to Eliminate Acne Scars

Although there are normal and expected scars, there are also scars that medicine considers pathological. Let’s see how they’re medically classified:

Each of these types of healing that result in different forms of scars have a medical approach. You can consult a surgeon or a dermatologist if you have a scar that concerns you. The professional will know and tell you the best approach for your case.

Natural Creams to Reduce the Appearance of Scars
In today's article, we'll tell you how to make some natural creams that will help reduce the appearance of scars naturally. Read more »
Link copied!
Interesting Articles
Anatomy and physiology
Discover How DNA Works