Types of Sarcoma and Its Characteristics

Sarcoma is a type of cancer that occurs in the soft tissues and bones. There are different types and clinical manifestations depending on the area of ​​growth of the tumor. 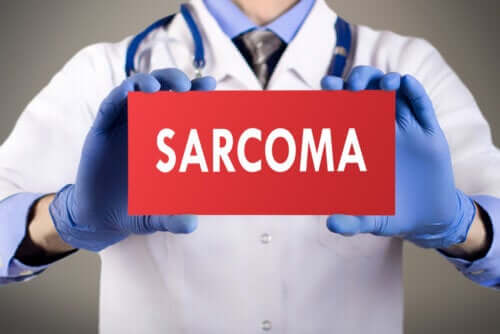 There are many types of sarcoma, and so it’s a rather diverse pathology that manifests in many different ways. It sometimes appears as lumps under the skin and then there are other times in which it presents itself as bone pain or abdominal bloating. There may even be weight loss, among other symptoms.

According to the American Cancer Society, this disease is an oncological variant that proliferates in soft and bone tissues, from adipose (fat) to nervous, passing through bones and muscles.

Sarcomas aren’t common. In fact, various studies indicate that osteosarcoma (a tumor in the skeleton) represents only 0.2% of all malignant cancers. This means there’s an incidence of about three cases per million people every year.

About cancer and its importance

One can’t discuss sarcomas without knowing some basic information about cancer. This disease is characterized by uncontrolled cell proliferation in some areas of ​​the body that gives rise to tumors. These often spread to other parts of the body due to a process known as metastases.

As you can see, the figures are, indeed, alarming. This is why we must be familiar with each type, regardless of how rare, in order to be able to cure more people throughout the globe.

Learn about the Five Primary Bone Cancer Symptoms You Should Know

As we mentioned above, all types of sarcoma are malignant tumors that originate in bone and soft tissues. According to statistics, they account for 20% of cancers detected in pediatric settings and less than 1% in adults.

The predisposition to have this pathology depends on genetic and environmental factors, and on the interaction between the two. However, specific causes remain unclear. According to an article published in the scientific portal ScienceDirect in 2007, there are different types of sarcoma. Continue reading to find out what they are.

This is the most common subtype and accounts for 20% of sarcoma cases in the USA. This cancer occurs in fat cells anywhere in the body. However, in most cases, it occurs in the fatty tissue of the extremities or abdomen.

It’s rather noticeable as it manifests as a growing lump under the skin, pain, and weakness of the affected limb when it occurs in the legs and arms. However, abdominal tumors manifest as constipation, bloating, and pain, among other symptoms.

In most cases, tumor removal and radiation therapy are the ways to go. There are several types of liposarcoma depending on their shape though. However, it doesn’t usually cause metastasis and only resolves with surgical intervention.

According to the organization sarcomahelp.org, leiomyosarcoma is one derived from smooth muscle cells — generally from the uterus or gastric tissue. This type comprises 5 to 10%, which makes it one of the most common of all soft tissue sarcomas.

There are no specific features for the diagnosis of this pathology but the sources cited above report they’re more common after 50 or 60 years. Also, they mainly affect women. Various studies show that treatment with Gemcitabine works well in more than 50% of the patients.

This type of cancer is less common and usually appears near the joints (especially of the knees) in young adults. Its main characteristic is a slow-growing deep lump that may be tender or painful to the touch.

Research reveals that this type of cancer is correlated with chromosomal variations. What this means is it has a large genetic component. As with liposarcoma, surgical removal is the best option.

Other types of sarcoma

We covered three of the most important types above. However, there are other types of sarcoma that we shouldn’t fail to mention. Some of them are:

As you can see, there are as many types of sarcoma as there are human tissues and the list is extensive. The main concept to keep in mind is that we’re dealing with a malignant tumor that varies with its location.

Things to keep in mind concerning different types of sarcoma

Sarcomas develop in both hard and soft tissues. Therefore, there are multiple types that manifest with specific symptoms, depending on the place where the tumor is growing.

As with every other cancer, early detection is key to a patient’s survival. Thus, consult your doctor immediately if you have a suspicious lump or unexplained pain.

Sarcoma: Characteristics and Causes
Sarcoma is a type of cancer due to the abnormal malignant growth of some body tissue cells that multiply out of control and lead to lipomas. Read more »
Link copied!
Interesting Articles
Illnesses
Hepatitis in Children: What You Need to Know