Poliomyelitis is a viral disease that’s almost a thing of the past, as it’s been controlled in most countries. Nevertheless, it’s important to know the types of poliomyelitis. 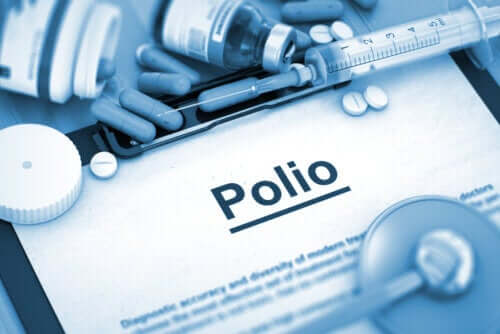 The different types of poliomyelitis (polio for short) are infectious diseases that mainly affect people’s nervous systems. As international sources such as the World Health Organization state, the poliovirus, a viral agent that’s composed of RNA and a protein capsid, causes this disease.

According to various studies, experts have distinguished three serotypes (different varieties). Experts detected the last case of serotype PV-2 in India in 1999. Thus, experts consider it eradicated. Nevertheless, serotypes PV-1 and PV-3 are still circulating in the population today. Both are highly infectious and cause paralytic poliomyelitis.

About polio and its distribution

The World Health Organization reported figures that allow people to get an idea of the global poliovirus situation. Some of them are the following:

As you can see, polio is basically a disease of the past. Nevertheless, care must be taken. Experts estimate that, if the virus isn’t eradicated from the last strongholds, more than 200,000 new cases could occur in less than 10 years.

This article may interest you: World Meningitis Day: A Disease that Has a Vaccine

Clinical studies highlight that there are four main types of polio. They’re the following:

Since the first two types are benign in their development, we’ll focus our attention on non-paralytic aseptic meningitis and paralytic poliomyelitis. Below, we’ll explain everything you need to know about both pathologies.

According to scientific research, aseptic meningitis is an infectious process that affects the meninges of the central nervous system (CNS) and makes them swell. It causes the following symptoms:

According to other bibliographic sources, viral aseptic meningitis (such as the one poliovirus causes) has a good prognosis. Not only poliovirus causes it. In fact, enteroviruses, herpesviruses, or HIV can also cause it.

Despite the fact that this condition is benign, it may require hospitalization and antibiotics. We say antibiotics, even though it’s caused by viruses, because medical professionals start treatment immediately in the most affected patients as a preventive measure against a much more dangerous bacterial meningitis.

This is the most serious manifestation of poliomyelitis. The sources we cited above estimate that one in every 200 patients will suffer irreversible paralysis, of which up to 10% will die from muscular respiratory tract problems.

Detecting this severe variation is a simple task, as the symptoms are very aggressive. Bibliographic sources report that, five days after infection, processes such as intense myalgias (muscle aches) and limiting muscle spasms occur, which culminate in chronic limb weakness. Paralysis usually reaches its peak within a week of infection.

The mortality rate in the acute stage is 5 to 20%. Worst of all, there’s no cure once it appears. Even so, after these critical phases, paralysis usually improves over the years. This is due to a reinnervation process the neurons that remain undamaged undergo.

Depending on the affected area, there are three types of paralytic poliomyelitis, which are the following:

50% of patients who survive this severe manifestation suffer lifelong weakness, and 20% to 85% of patients with a history of childhood poliomyelitis may develop post-polio syndrome. It causes progressive muscle atrophy that limits functional capacity.

To know more, you should read: What It’s Like to Live With Multiple System Atrophy

What to remember about the types of polio

As we explained in this article, poliomyelitis is a disease that’s controlled in most areas of the world. Furthermore, 90% of cases are asymptomatic, which is why it’s unlikely for a clinical picture to be associated with poliovirus today.

On the other hand, there are very effective oral and intravenous polio vaccines, with an efficacy of 99% after three doses. Therefore, if global efforts to eradicate it continue, polio will soon be a thing of the past.

Encephalitis: Symptoms, Causes, and Treatment
Encephalitis usually causes fever, headache, and fatigue. It can also cause coma and even death. It is a serious condition that, unfortunately, affects children under one year old more frequently than other groups. Read more »
Link copied!
Interesting Articles
Illnesses
Hepatitis in Children: What You Need to Know