Types of Chronic Urticaria and Its Characteristics

Chronic urticaria is a pathology characterized by the appearance of hives and itching for a period of more than six weeks. The causes are still unknown, despite efforts to identify them. 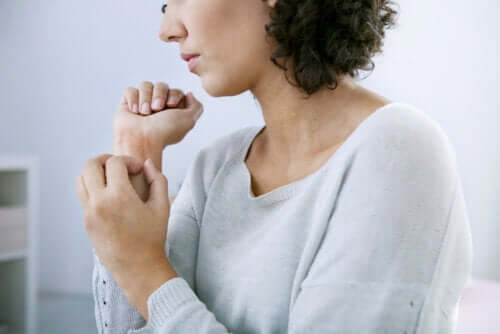 Chronic urticaria is a skin disease characterized by the appearance of skin lesions that manifest in various ways. There’s usually a rash and intense itching in the affected area. According to various studies, estimates indicate that 20% of the global population has had it at least once in their life.

It’s essential to be familiar with the causes of urticaria in order to deal with it effectively. This is mainly due to its high prevalence and the discomfort of its clinical picture, types, and epidemiology. Today’s article will focus on its chronic form.

Context and frequency of the disease

Before addressing the particularities of any disease, you must know what the manifestation dynamics are that it follows over time. In fact, this is one of the first steps you need in order to plan its treatment and containment.

At this point, note there are two distinctions to the types of urticaria. It’s acute when the episode lasts up to six weeks and chronic thereafter. As strange as it may seem, there’s not a lot of information in regard to the cause and origin of 80% of cases.

Learn what are the Five Topical Remedies to Relieve Rashes

It may seem a harmless disease due to its superficial nature. However, the various types of chronic urticaria can significantly decrease the quality of life of a person. Clinical studies equate the impact of this disease with some forms of heart disease.

According to the Asociación de Afectados por la Urticaria Crónica (AAUC), its diverse origins are mostly related to processes such as:

There’s no official division into categories or types of chronic urticaria and international medical institutions have validated this. We can classify it according to its causal agents, though, and these are the three most common causes.

Dermatological studies highlight that this is the most common cause. This is because estimates indicate it occurs in 45% of cases. The body itself activates the skin cells, they release histamine (a compound involved in the immune system), and hives occur.

Even so, other medical review articles highlight the general ignorance of this mechanism. This is because the trigger that activates the mediating antibodies of the immune system isn’t yet fully understood. About 15% of cases have associated diseases in the thyroid glands (autoimmune thyroiditis, for example).

Some infectious processes and viral agents, bacteria, and fungi are capable of promoting the appearance of chronic urticaria. Some of them are:

Let’s specially mention the case of Helicobacter pylori infection, a bacterium that lives in the epithelium of the human stomach and that seems to be related to this pathological process. In fact, a study in the Allergologia et Immunopathologia journal informs us that 71% of patients with chronic urticaria who participated in it had this microorganism in their digestive system.

However, only three of the 21 patients monitored showed substantial improvement when the bacteria cleared from their gastrointestinal tract. Therefore, a clear correlation between the two factors remains in doubt.

Various analyzes in the scientific world explore the correlation between drug use and the appearance of chronic urticaria. This pathology can aggravate with the consumption of medication such as aspirin and other non-steroidal anti-inflammatory drugs (NSAIDs).

A review published in ScienceDirect in 2015 includes some of the most effective treatments against chronic urticaria. These are the most relevant:

Most of these drugs seek to modulate the response of the immune system and reduce the inflammatory process. Depending on the underlying cause of the disease (hard to identify), more than one drug may be required at the same time.

Find out more about the Symptoms, Causes and Treatment of Skin Rash

In any case, we must understand that any skin rash that lasts more than six weeks is a clinical manifestation of chronic urticaria. Thus, you must consult a doctor promptly in order to begin treatment as it’s essential in these cases. They should be able to indicate some general measures to lessen the annoying signs and possibly even prescribe medication.

World Lupus Day: The Butterfly Rash Disease
May 10 is World Lupus Day, which has been commemorated since 2004. This disease known as "the great imitator", characterized by a butterfly rash. Read more »
Link copied!
Interesting Articles
Illnesses
Excessive Appetite: What Are Its Causes?