Is Turmeric as Effective as These Medications?

Did you know that turmeric has some powerful properties that may make it similarly effective to pharmaceuticals for some conditions? Read more here. 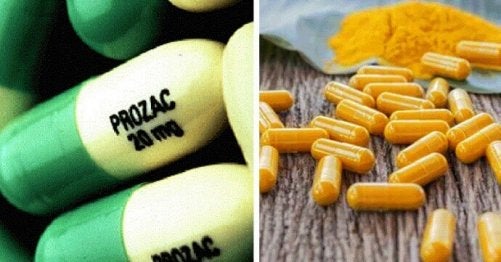 Pharmaceuticals aren’t the only means of alleviating certain symptoms. In fact, you can also choose from a number of natural options whose effects can be beneficial for your health. Such is the case with turmeric, a spice that’s well known for its gastronomical uses.

This ingredient comes from the same family as ginger and is believed to contain various medicinal properties. In fact, there are a number of scientific studies that have looked into the properties of turmeric.

It’s true that turmeric can be powerful when it comes to relieving certain ailments and offering different health benefits. However, it’s important to clarify that you shouldn’t use it to replace prescription medications without the authorization of your doctor.

Is turmeric just as effective as the following medications?

In order to mitigate the symptoms of a variety of ailments, there are a plethora of pharmacological medications available. Many of them include, among other components, medicinal plants among their active ingredients–in very precise doses. And this is the case with turmeric, as we mentioned above.

Turmeric is a spice that has been recognized for its supposed medicinal properties for quite some time. In fact, it’s attracted the attention of scientists thanks to the fact that it contains curcumin, a polyphenol recognized as having antioxidant and anti-inflammatory properties.

While a number of studies continue to test these benefits, the evidence is not conclusive. Therefore, it’s still not safe to say that this spice is just as effective as the pharmacological treatment of any ailment. For that reason, you should never abandon your medical treatment in order to take turmeric.

Atorvastatin is a pharmaceutical drug that doctors prescribe to control cholesterol levels. They also use it to prevent the development of cardiovascular diseases.

According to a study published in the year 2016, the effects of the curcuminoids in turmeric are comparable to those of Atorvastatin regarding endothelial dysfunction. This is a disease that leads to arteriosclerosis.

According to information, this spice reduces inflammation and oxidative stress that worsens in patients with type 2 diabetes.

Thousands of people every year get steroid injections to treat inflammation associated with diseases such as arthritis.

A study published in the magazine Phytotherapy Research found that curcumin, the active compound in turmeric, functions just like this type of pharmaceutical drug when treating inflammatory eye disease.

Furthermore, later studies also observed similar benefits regarding other inflammatory conditions treated with steroids. However, it’s important to remember the importance of consulting with your doctor before making any changes in treatment.

Antidepressant medications like Prozac and Paxil have serious side effects. In fact, these can actually worsen depressive symptoms in some people.

But, can you substitute these medications with turmeric? A 2010 study looked at turmeric due to its active function in treating a variety of central nervous system disorders. However, further research is necessary in order to evaluate its effect on the symptoms of depression.

In cases of depression, it’s best to talk to your psychologist and/or psychiatrist. The professional with be able to provide you with specific guidelines regarding treatment.

Patients that are at risk of heart attack or circulatory conditions generally use pharmaceutical blood thinners as a preventative measure.

Turmeric does not have the same effects, nor should you ever consider it to be a substitute for this kind of medication. However, experts believe turmeric to have effects similar to those of aspirin. The active compounds in this spice have antiplatelet and prostacyclin modulating effects.

Studies show that turmeric has anti-inflammatory and anti-proliferating effects. However, it’s not as potent as the effects that the following medications produce:

Diabetic patients may also find the benefits of turmeric to be useful to them. All they have to do is incorporate this powerful spice into their diets.

A publication of the magazine Biochemistry and Biophysical Research Community revealed that curcumin may have positive effects on the absorption of glucose.

At the same time, turmeric also helps to prevent excessive glucose production in the liver. The effects are similar, but not equal to those of medications designed for this purpose.

What benefits does turmeric offer?

As we’ve already mentioned, the intention of this article is to provide information regarding the properties of turmeric in comparison to the effects of certain medications.

Turmeric has received worldwide recognition for its positive effects on our health. These seem to occur mainly through its antioxidant and anti-inflammatory mechanisms.

There are also studies that suggest that turmeric could be useful as a complementary treatment of muscle swelling and pain. However, once again, you should never use turmeric as a substitute for the medications prescribed by your doctor.

9 Properties of Wormwood for Liver Health
The preoperties of wormwood can help your liver. This is why you should turn to a specialist to monitor your treatment with this plant. Read more »
Link copied!
Interesting Articles
Natural remedies
3 Home Remedies with Honey for Respiratory Health