Turbinate hypertrophy is a benign pathology for which there are various treatment options. However, if it goes untreated, it can lead to certain complications. Learn more in this article! 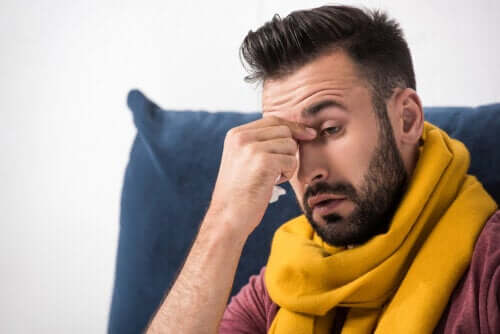 Turbinate hypotrophy, or nasal conchae, is the exaggerated increase in the volume of the turbinates. These structures are in the nasal cavity and, when their size increases, air can’t flow normally. As a result, they tend to cause nasal obstruction.

Early on, it’s possible to treat and overcome this disease either with medications or via surgery. However, if the problem goes unchecked, it can lead to serious situations. For example, it may cause loss of smell or even ear and throat infections. It’s also possible for people with this condition to suffer frequent headaches, dry cough, and snoring.

If nasal congestion is frequent, then it’s important to see an ear, nose, and throat specialist. This professional will be able to determine if you’re suffering from hypertrophy or another pathology.

Turbinate hypertrophy is a condition that increases the size of the nasal turbinates. In some cases this is intermittent. However, in other cases, it’s continuous. When the problem becomes chronic, it produces nasal congestion that’s almost constant.

The function of the turbinates is to humidify, warm, and cleanse the air that we inhale. However, these are very delicate organs that can easily swell and change in size. This leads to hypertrophy, which is a treatable health problem.

You may also want to read: Do You Have Nasal Congestion? Try These 7 Remedies to Quickly Find Relief

Why does it occur?

In most cases, turbinate hypotrophy occurs as a result of some allergic processes, such as hay fever. However, many other reasons can also produce this anomaly. Among these are the following:

The symptoms of turbinate hypotrophy

The most typical symptom of this condition is nasal congestion, whether it be intermittent or constant. However, it’s important to note that there are some cases of hypertrophy without noticeable symptoms.

Overall, the most common clinical manifestations are the following:

Most often, doctors will perform what’s called a rhinoscope to diagnose it. This is a study that allows them to examine the turbinates and confirm or rule out hypotrophy. This exam is done by the nose or the mouth and takes between five and ten minutes. On some occasions, it requires the use of mild anesthesia.

While snoring is one of the clinical manifestations of hypotrophy, the most frequent symptom is prolonged nasal congestion.

Don’t forget to read: 6 Tips to Get Relief From a Stuffy Nose

What can be done in the case of turbinate hypotrophy?

The treatment of hypotrophy will depend on the underlying cause and the state of the turbinates. First of all, if the cause of the problem is external, then changing this variable should lead to the remission of symptoms.

When we talk about external symptoms, we’re referring to unhealthy environments, the ingestion of some substance or medication, etc. However, if the cause is sinusitis or a deviated septum, then treatment will be necessary to eliminate the cause. If these measures don’t work, or the cause is unknown, then doctors usually recommend pharmacological treatment to reduce inflammation.

Finally, if hypotrophy persists, doctors may suggest surgery to modify the position of the turbinates (turbinoplasty). In some cases, surgery may involve the partial or total removal of the inferior turbinate (turbinectomy). Finally, in other cases, doctors may use radiofrequency or laser to reduce the size of the turbinate.

Either way, it’s important to remember that it’s a treatable condition. The key is to seek medication attention early to ensure it doesn’t become chronic.

Symptoms and Treatment for Sleep Apnea
Do you know anyone who suffers from sleep apnea? Keep reading this article to discover the symptoms and treatment for sleep apnea. Read more »
Link copied!
Interesting Articles
Illnesses
Do You Know about the Genetic Basis of Cancer?