Tungiasis is an infection caused by a type of flea. It primarily attacks the feet. Normally, it goes away by itself. Read on to learn more! 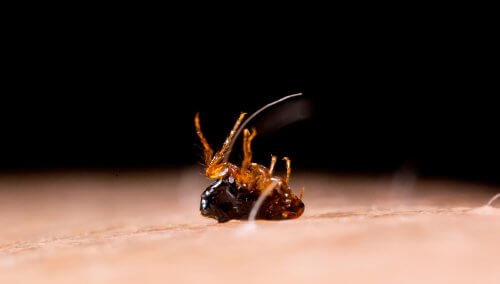 Tungiasis is an ectoparasitosis. In other words, it’s a parasitic disease. It’s caused by the flea Tunga penetrans. This is an insect smaller than 0.03 inches that attaches to the skin and produces intense itching. It mainly attacks the feet.

The disease occurs in the tropical and jungle regions of America, Africa, and Asia. It’s becoming increasingly rare due to development. The use of footwear and floors made of tiles and cement prevent its spread.

The flea responsible for the development of tungiasis has little host specificity. The term “host” refers to the body that allows the flea to survive. In addition to humans, the condition can also affect poultry, dogs, and pigs. The habitat where it’s more common to find this flea consists of dry, sandy, shaded, and tempered soil. In turn, it also inhabits floors of sheds, houses, and animal barns.

This disease causes various symptoms. It most commonly infects feet. However, there have been reported cases of infections on the legs, knees, thighs, hands, elbows, and other body parts.

The lesions may be single or multiple. They may itch, be painful, or, on the contrary, may even be asymptomatic. The phenomenon of flea penetration is asymptomatic. However, after 24 hours, the affected person may start to see an itchy or reddish macule or papule.

Also, at the site of the penetration, the affected person may observe whitish nodules with a black dot in the center that corresponds to the abdomen of the flea. Also, they may also see eggs attached to the skin near the injury. Once the flea dies, the injury has a black crust. This crust consists of coagulated blood, among other substances, and regresses, leaving a scar on the skin.

Although tungiasis tends to disappear spontaneously over 4-6 weeks, reinfestation is common. Also, the patient usually suffers from other concomitant infections, such as:

You may also want to read: Plants that You Can Use as Natural Flea and Tick Repellent

Some experts established a classification known as Fortaleza classification to standardize the clinical descriptions and facilitate recognition of lesions as they evolve.

This classification consists of five stages, ranging from penetration to injury involution. There are less common clinical variants with scabby, pustular, ulcerated, and warty, like plantar warts and lesions.

Stage 2 starts one to two days after the infection. In this case, a hypochromic macula or papule with a black spot (as we explain above, it corresponds to the flea’s abdomen), surrounded by an erythematous halo, appears.

As for stage 3, it corresponds to the time between 2 and 21 days after penetration. During this time, an off-white, painful papule with a diameter from 3 to 10 mm with a black dot at the center appears. Also, the patient may suffer from hyperkeratosis and yellowish exudate. The patient may see the eggs expelled from the flea.

Continuing with stage 4, it corresponds to the period ranging between three and five weeks after penetration. During this stage, the flea dies. Then, a halo of necrotic skin covered by crust forms around the original lesion.

Finally, in stage 5, which corresponds to approximately six weeks to several months after penetration, the lesion regresses. In other words, it forms a small scar that fades over time.

You should also read: How to Get Rid of Fleas with Diatomaceous Earth

The first step is extracting the flea, being careful not to tear it. For this purpose, the medical professional usually enlarges the hole and presses the edges to remove the parasite. They should do it in completely sterile conditions.

Also, they should apply a topical antiseptic to prevent other infections and reduce the risk of complications. Likewise, they have to administer a tetanus prophylaxis treatment.

Relieve Flea Bites With 5 Home Remedies
Beyond relieving the itching and inflammation that results from flea bites, these remedies will also help to disinfect the area and prevent further problems. Read more »
Link copied!
Interesting Articles
Illnesses
Can Celiac Disease Cause Infertility?