True Friendship: They Carried Their Disabled Friend Around the World

Thanks to friendship, a dream, and determination, 29-year-old Kevan Chandler traveled the world despite suffering from spinal muscular atrophy. Learn more about this incredible inspirational story in this article! 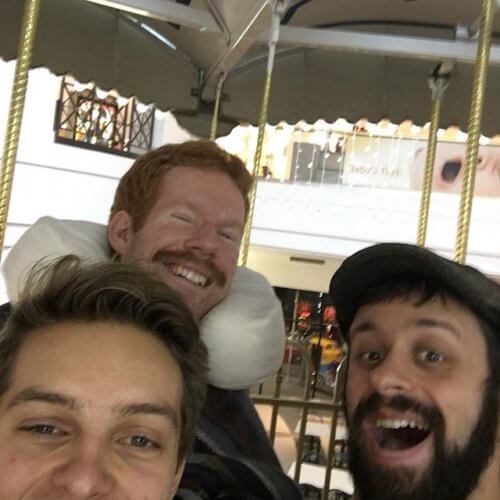 True friendship often means making a sacrifice to meet the needs of someone we love.

In this case, the miracle of true friendship can be found in 29-year-old Kevan Chandler and his friends Tom Troyer, Philip Keller, Benjamin Duvall, and Luke Thompson.

When this group of American friends made plans to spend their holiday in Europe, they decided that leaving Kevan behind wasn’t an option. After all, traveling the world had been his dream.

Kevan Chandler is a writer who suffers from spinal muscular atrophy, a painful degenerative disease that results in muscle weakness and the inability to walk.

Although this disease deprived him of some physical faculties, it didn’t take away his desire to see the world and have adventures in new places.

Normally, Kevan gets around in a wheelchair, but there are certain places he can’t reach.

This was no problem for his group of friends, who decided to build a customized backpack and padded seat for Kevan. They carried him whole way, taking turns carrying his 70-pound frame.

The first adventure was in 2015, when his friends planned a tour of North Carolina.

Given his condition, Kevan thought he couldn’t join them. But his friends had another idea: they put him in a backpack and took him with them to explore.

The first trip was a success, so they wanted to go farther. They decided to go to Europe, a place where Kevan could see things he thought he would never see.

Kevan’s friends didn’t believe that his muscular dystrophy should make his dreams any smaller or larger than those of other people.

So in addition to designing a backpack for Kevan and planning to carry everything he needed to survive, they set up a fundraising campaign through GoFundMe.

This is how they succeeded in collecting the money needed to carry out their great adventure.

They also documented their trip on the We Carry Kevan blog and an Instagram account (WeCarryKevan), where you can see photos from all their travels.

In addition, they plan to produce a documentary soon with stories from their experiences.

What they learned from their adventure

This group of friends went on a journey through Europe and saw amazing places in England, France, and Ireland.

Kevan wanted to see places that would normally be inaccessible to him. Over 19 days, they traveled Europe and saw beautiful landscapes, mountains, incredible cities, and magical sunsets.

But not everything was easy, because they had to prepare themselves physically to carry Kevan’s weight, and he had to give up his independence in the wheelchair and trust his friends.

Kevan says it’s not just about him, but about the whole group. For him, it’s extremely important to have support and know that every challenge, achievement, and even failure has given him the courage to get back up again.

“Every step of the way, I’ve had my family, my friends, and God. That is where my strength comes from (the strength of all of us!).

I hope that I will give them strength as well, because that’s the point: to give courage to each other. Join us. This life is lived together. We all become stronger and more courageous with each other,” Kevan reflects.

International Family Day: The Best Gift Life Can Give

A source of inspiration

With the incredible story of this journey and true friendship, Kevan aims to be a source of inspiration for other disabled people in the world.

He wants them to recognize that there is no such thing as an unattainable dream or obstacles that people can’t overcome.

The story of Kevan Chandler and his friends definitely demonstrates the value of true friendship.

It also teaches us that perseverance, a positive attitude, and willpower can help us overcome all difficulties and achieve our dreams.

The Incredible Story of Hope, The Child Witch
Believed to be a child witch, little Hope was abandoned and left to fend for himself. In this article, we'll discover his story of strength and courage. Read more »
Link copied!
Interesting Articles
Relationships
What is Emotional Codependency?