Dysphagia is a disease that can appear from several reasons. Because of this, there’s no single treatment. In fact, it’s necessary to establish an accurate diagnosis to choose an appropriate approach. In this article, discover the treatments for dysphagia. 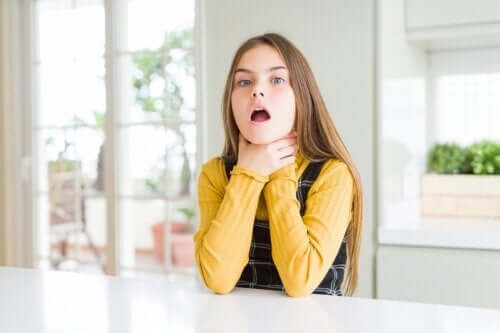 Treatments for dysphagia depend on which type the patient’s suffering from. In this article, you’ll learn all about the different types, as well as how they can be treated.

Most cases require strict medical therapies and even surgery. However, a doctor must make an accurate diagnosis before deciding on a treatment. Some dysphagias are temporary, while others represent a serious, even oncological, problem.

Dysphagia and its types

Dysphagia is difficulty swallowing. In other words, the patient feels pain when something passes down their throat.

If the problem is the throat itself, we may be facing an infectious or inflammatory odynophagia. Dysphagia is when a person has a hard time swallowing food or saliva from the oral cavity into the stomach.

As you can see, several organs play a role in this disorder, which makes it more complex. In addition, it can either be a difficulty either swallowing liquids or solids. Those small symptoms guide the diagnosis to a great extent.

These are the types of clinical presentation:

Treatments for oropharyngeal or transfer dysphagia

Firstly, to treat oropharyngeal dysphagia, the medical professional has to first diagnose the condition. The first causes they look for are those that can be corrected with habit modifications.

One of the first things medical professionals suggest are dietary changes, such as modifying the textures and volumes of food. The goal is to help the patient be able to swallow and digest foods.

Posture is a determining factor in patients who suffer from neurological disorders due to primary pathologies or after-effects. For many, just changing their neck position when they eat is enough to correct dysphagia.

Rehabilitation processes are also applied for this important daily activity. We learn to eat when we’re young. However, for example, patients who suffer strokes must learn to do it all over again. Both nutritionists and physical therapists teach patients to eat.

In complex cases, doctors may prescribe nutritional support or adaptive feeding devices. If the patient doesn’t eat despite the modifications, or loses weight and becomes dehydrated, then their doctor will prescribe one of these devices.

Esophageal cancer isn’t the only cause of this type of dysphagia. Thus, proper treatment depends on proper diagnosis. Perhaps the patient may be suffering from esophagitis, which is inflammation of the esophagus. They may also have achalasia, which is when the lower esophageal muscle (sphincter) doesn’t relax properly to let food enter the stomach.

If a doctor opts for the surgical route, they’ll likely resort to endoscopy. To do this, they insert a flexible fiber tube that runs through the upper gastrointestinal tract, looking for obstructions. The device has a camera and tools for the surgeon to work with. If they find a foreign body, they must remove it. In addition, it also allows surgeons to take biopsies.

The endoscope can also perform dilations to allow elements inside the esophagus to move in patients with severe obstructions due to a decrease in esophageal lumen.

Some of the drugs that can address the problem without surgery are the following:

Find out more here: Signs and Symptoms of Esophageal Varices

Treatments for dysphagia are complex

As you’ve seen in this article, it isn’t easy for doctors to address and treat dysphagia. Serious underlying causes, such as cancer, require an accurate diagnosis that leaves nothing to chance.

For this reason, it’s important for patients to see their doctors as soon as possible and follow their indications. This disorder can lead to malnutrition and dehydration.

What Are the Causes of Dysphagia?
Dysphagia refers to discomfort or difficulty when swallowing and occurs for a number of reasons. Today, we'll tell you more abut the causes of dysphagia. Read more »
Link copied!
Interesting Articles
Treatments
The Differences Between a CT Scan and an MRI