The Uses of Naproxen

Pharmacokinetics involves the processes of absorption, distribution, and the two routes of drug elimination: metabolism and excretion. In this regard, naproxen is administered orally and is rapidly absorbed by the gastrointestinal tract. Below, discover the uses of naproxen. 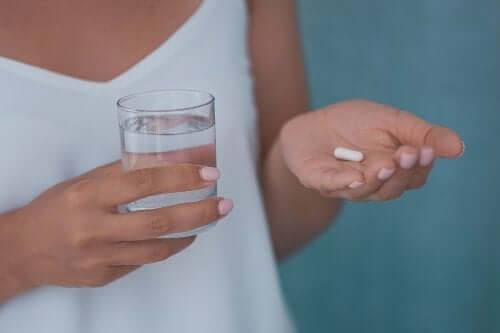 Naproxen is an analgesic drug. It belongs to the big family of NSAIDs, also known as non-steroidal anti-inflammatory drugs. Find out about all the uses of naproxen in this article.

This drug is contraindicated in patients who suffer from duodenal ulcers, as well as in pregnant or lactating women. The reason for this is that, as you’ll see below, naproxen crosses the placenta and part of it is excreted in breast milk. This drug is administered orally, and the dose is 250 mg every 12 hours; the maximum daily dose is 1000 mg.

The main uses of naproxen

This drug serves both as an antipyretic and as an analgesic. It has an effect similar to that of aspirin. However, it’s better tolerated. In addition to these two effects, it’s also an anti-inflammatory drug that doctors prescribe to treat rheumatic diseases such as:

Likewise, it’s indicated for the treatment of mild to moderate pain that tendonitis, bursitis, toothache, dysmenorrhea, or migraines cause.

On the other hand, as naproxen has antipyretic effects, it can help treat febrile episodes and relieve cold symptoms.

As we already mentioned above, naproxen is a nonsteroidal anti-inflammatory drug (NSAID). A curious fact about this drug class is that it’s one of the most prescribed. This is because they have many different uses.

Naproxen, like all non-opioid analgesics, have the same mechanism of action. They work by inhibiting the activity of cyclooxygenase enzymes. This leads to the inhibition of prostaglandin synthesis, specifically PGE and PGL.

Prostaglandins are protein substances that play a role in many physiological processes, such as inflammatory reactions and pain and fever. Due to this, the inhibition of the enzyme involved in its synthesis can control all those symptoms.

You should also read: Three Natural Painkillers to Relieve Migraines

The main adverse reactions of naproxen

Naproxen is one of the best-tolerated NSAIDs. However, like all drugs on the market, naproxen can cause a series of adverse reactions. Adverse reactions are the undesirable and unintended events that a patient can expect when they start treatment with a drug.

So, naproxen can cause a series of digestive disorders such as:

If administered rectally, it can cause:

On the other hand, it’s also capable of triggering nervous system alterations, such as headaches, vertigo, or loss of consciousness, among others.

Here are other side effects naproxen can cause:

Pharmacokinetics: what happens to naproxen in the body

Pharmacokinetics involves the processes of absorption, distribution, and the two routes of drug elimination: metabolism and excretion. In this regard, naproxen is administered orally and is rapidly absorbed by the gastrointestinal tract.

Approximately two to four hours after administration, naproxen reaches its maximum plasma levels. It has a half-life of between 12 and 15 hours. This is the time it takes for the body to eliminate half of the plasma concentration of the drug.

On the other hand, to distribute itself in the body, it needs to bind to plasma proteins. Specifically, it binds almost entirely (99%). This fact is important because it favors interaction with other drugs that also bind to plasma proteins to distribute themselves. This can cause toxicity if the medical professional doesn’t take the necessary measures.

Furthermore, Naproxen is able to cross the placental and blood-brain barrier. Because of this, you need to exercise caution. Finally, this drug is metabolized in the liver and 95% is excreted through urine and partially through breast milk.

Read on to learn more: The Common Classification of Painkillers

Conclusion on the uses of naproxen

In short, naproxen is an NSAID that doctors prescribe mainly to treat rheumatic diseases. However, it has many other uses.

Pregnant and lactating women, as well as people with duodenal ulcers, shouldn’t take this drug, as it can cause serious consequences.

If you have any questions, we recommend consulting both your doctor and pharmacist before taking naproxen in order to avoid possible complications.

Characteristics and Uses of Ketorolac
Ketorolac trometamol is the active ingredient of some medications in the group of analgesics, anti-inflammatories, and antipyretics. Read more »
Link copied!
Interesting Articles
Medication
Uses and Side Effects of Citalopram