The Symptoms and Causes of Atelectasis

This condition can result from trauma, having undergone general anestesia, or other causes. In today's article, we'll tell you all about the symptoms and causes of atelectasis. 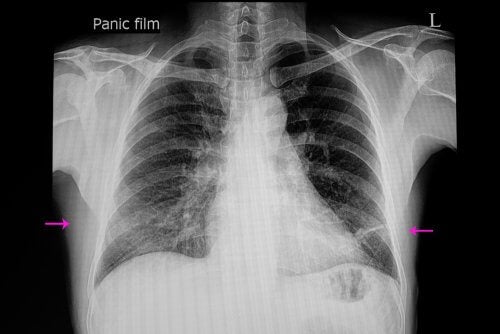 The word atelectasis comes from atele-vs (incomplete) and éktasis (expansion). It’s a disorder where part of the lung becomes devoid of air and collapses. Today, we’ll tell you all about the symptoms and causes of atelectasis.

This condition can involve the entire lung or just one part (lobe). In general, it occurs as the result of an obstruction of the airways or pressure on the external part of the lung. Therefore, the alveoli deflate or fill with liquid.

This is a frequent complication when it comes to certain respiratory problems. For example, it can occur in patients that have cystic fibrosis, tumors in the lung, thoracic surgeries, etc. In fact, it can also occur when a person inhales a foreign object. Those who experience atelectasis can experience difficulty breathing.

In the paragraphs below, you’ll discover all you need to know about this condition.

The symptoms of Atelectasis

When talking about the symptoms and causes of atelectasis, it’s important to differentiate between this condition and pneumothorax. A pneumothorax occurs when air escapes from the lung. So, atelectasis is a decrease in the amount of air in the lungs with a loss of volume of the affected lung, while pneumothorax is the presence of air in the pleura.

Among the symptoms of atelectasis, we can mention the following:

You may also want to read: Respiratory Diseases in Newborns

The causes of atelectasis

First of all, atelectasis can be caused by an obstruction of the bronchial tubes of the bronchioles. It can also occur as a result of pressure on the external part of the lung.

Furthermore, general anesthesia is another common cause. That’s because it changes the regular rhythm of breathing and, as a result, affects the exchange of cases. Therefore, anesthesia can cause the alveoli to deflate. Almost all people who undergo major surgery develop some degree of atelectasis.

The causes of obstructive atelectasis

The causes of non-obstructive atelectasis

In this case, the possible causes include:

Discover more: Optimize Your Lungs by Adding these Food Items to Your Diet

The diagnosis of atelectasis

To diagnosis atelectasis, a proper clinical exploration and an X-ray will usually suffice. Just the same, doctors may use a series of techniques to confirm the diagnosis or determine the degree of seriousness.

These techniques include a CT scan (computerized tomography), bronchoscopy, ultrasound, and oximetry. In fact, bronchoscopy allows for the observation of obstructions and even the elimination of blockage.

Treating atelectasis varies according to the cause. In fact, mild atelectasis may go away on its own without treatment. In cases that require treatment, the main options are the following:

In some cases, specialists prescribe continuous positive airway pressure (CPAP). This is useful for individuals that cannot cough or suffer hypoxemia, generally after surgery.

Atelectasis is a disorder that can easily go unnoticed. However, it can also be a serious problem and be the result of a subjacent condition. Therefore, it’s important to know the causes and symptoms of atelectasis to establish the best treatment, if necessary.

If you experience any difficulty breathing, seek medical attention immediately.

How Pneumonia Affects the Body
Pneumonia is a frequent illness worldwide, and it's common for people to ask themselves how pneumonia affects the body. We'll answer this question today. Read more »
Link copied!
Interesting Articles
Illnesses
5 Types of Hepatitis and Their Main Characteristics