The Side Effects of Birth Control

Hormonal contraceptives can have severe side effects in some women. Find out nine of the most common side effects below. 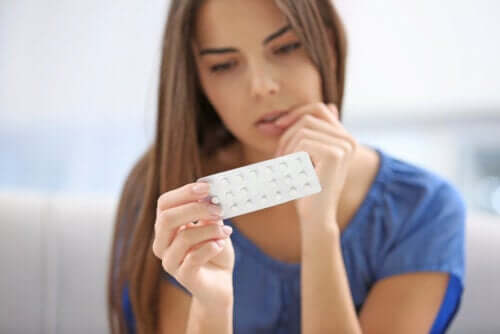 When many people think of hormonal contraceptives, they think of them as a way to prevent pregnancy. However, they are still medication, and in fact, a lot of women use birth control for that reason. Thanks to advances in science, pharmacists have developed different types of birth control so women can choose the one that fits them best. Still, you should expect some side effects when starting birth control.

The majority of contraceptives release hormones into the bloodstream. Because of this, many women experience side effects, which can vary from person to person. In this article, we’ll explain nine of the most common side effects of birth control and why they happen.

Why do contraceptives cause adverse reactions?

Currently, hormonal contraceptives are the most effective pregnancy prevention method. Moreover, they are the most commonly used form of birth control amongst women, along with condoms. Falling under this category are:

The administration of exogenous hormones is the reason side effects occur from contraceptives. In general, everything related to female fertility, including the menstrual cycle, is regulated by the hormones estrogen and progesterone.

When exogenous hormones enter the body, they disrupt natural hormonal synthesis. In this way, the menstrual cycle and ovulation stop following their normal course, which prevents pregnancy.

The problem is that these hormones don’t only affect the reproductive system. They also alter other parts of the body, such as the breasts and adipose tissue. Therefore, hormonal contraceptives do more than just interfere with fertility; their effects can be felt elsewhere.

Spotting, or bleeding between periods, is a side effect in which you might have unexpected light or moderate bleeding between two periods. According to studies, this secondary reaction is the result of nonadherence to the pill and is most likely to occur shortly after you begin taking the pill.

Once your body gets used to the hormonal changes, the bleeding should stop. However, if bleeding becomes heavy or lasts more than five days, you should talk with your doctor to discard other possible causes.

Many women report experiencing dizziness, nausea, and vomiting when starting birth control. Still, these symptoms can happen for reasons unrelated to the contraceptive.

It’s important to remember that with oral contraceptives, vomiting can interfere with birth control‘s proper functioning. Therefore, you must understand what to do in case you have to take another pill. As a general rule, if you vomit within twelve hours of taking your pill, you should take another one.

As we previously mentioned, the active hormones in contraceptives can affect breast tissue and cause the breasts to feel swollen or sensitive. Additionally, many women describe feeling pain to the touch, as explained in the Mexican Journal of Gynecology and Obstetrics.

Women report headaches as one of the most common side effects of birth control. If you regularly suffer from migraines, your doctor will likely suggest avoiding hormonal contraceptives and recommend other alternatives, since there is some evidence that links the two.

The reason, the Mayo Clinic explains, is that fluctuating estrogen levels can alter certain chemicals most often related to this symptom. Therefore, you might have to take medicine for headaches during some phases of your menstrual cycle, or, if they are very painful, you might find it best to avoid hormonal contraceptives entirely.

You might like:Signs and Symptoms of High Estrogen Levels

Weight gain is one of the most controversial side effects of hormonal birth control, though it seems that there is no actual increase in body mass. In other words, you are almost certainly not gaining fat.

Instead, it’s most likely you are retaining liquids. This is especially true at the start of the hormonal contraceptive regimen, which is why it is considered an adverse effect of initial contraceptives. Over time, the internal electrolyte balance stabilizes and your body should no longer retain liquids.

As described in oral contraceptive drug descriptions, some women might have mood changes. In other words, these women might feel they are emotionally unstable and could actually be at a higher risk of depression or other mood disorders.

With that being said, researchers are still studying the relationship between birth control and depression. The studies we used as resources agree that the effect is minimal and, when it could be verified, appeared after 10 or more years of taking the pill.

Discover more: Contraceptive Methods: Know the Myths and Truths About Them

Amenorrhea refers to the lack of menstruation when you are expecting it to occur. This, just like spotting, is a common side effect of hormonal birth control and is related to hormonal imbalance.

The truth is that many factors can influence your period, not just pills. Stress, diet, and physical exercise, as well, are all determining factors. However, it is important to take a pregnancy test if your period does not come when it is supposed to, just to be sure.

A variety of conditions can alter one’s sex drive. It’s possible hormonal contraceptives can cause a decrease in libido, though, of course, they aren’t the only factor

According to an article published in Obstetrics and Gynecology, a decrease in sex drive is observed more often in the birth control patch and subdermal implant than in other hormonal birth control methods. However, it is extremely difficult to separate other variables that could also result in a lowered sex drive.

Another common side effect of hormonal contraceptives is a change in vaginal discharge. This fluid responds to internal hormonal changes and the makeup of vaginal flora.

This change is rarely a sign of illness. As a matter of fact, women should expect vaginal discharge to change when starting a new birth control method and during the entirety of its use. It is even expected that the change will happen and that it will be maintained during the use of pills or injectables.

Birth control is safe despite the side effects

Hormonal contraceptives are a safe and effective way of preventing pregnancy. However, this doesn’t mean it’s free from any unwanted side effects.

Therefore, you should always talk with your doctor if you have any questions about your contraceptive. Medical professionals will help you choose the right birth control method for you and your situation. Every woman has the right to choose what works best for her lifestyle at the lowest risk of complications.

Is It True that Women’s Periods Synchronize?
It's a popular belief that women's periods synchronize when they live together. But is this really true? Find out more in the following article. Read more »
Link copied!
Interesting Articles
Medication
Uses and Side Effects of Dicloxacillin