The Most Common Questions About Arthritis

Arthritis is related to physical fitness levels, lifestyle, occupation, and genetics. There are different varieties and forms in which it occurs, both in men and women. Today, we'll answer the most common questions about arthritis. 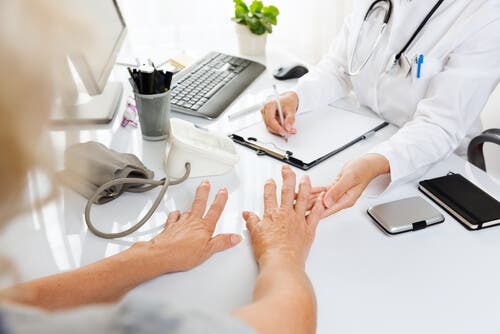 Do you really know what arthritis is and what causes it? Don’t worry if you don’t, as it’s very common to have questions about arthritis.

Although many people misuse it, the term arthritis refers to an inflammation of the joints. Even though rheumatoid arthritis is the most common, it’s not synonymous with arthritis itself. Nor can we use the two terms interchangeably. This is just one of the things that people tend to confuse about arthritis.

This is because, in reality, there are many different types of arthritis. In fact, experts estimate there are nearly 100 varieties! What’s more, many illnesses are associated with this inflammation of the joins, which also involves pain and rigidity.

Since arthritis is such a diverse and multifactorial disorder, it’s hard to know how many people this condition affects exactly. However, statistics affirm that 1 in 6 people suffer from this pathology. Therefore, in this article, we’ll try to resolve the most common questions about arthritis.

Common questions about arthritis: Who does it affect?

The truth is that arthritis affects people of any age. As we’ve already mentioned, the term arthritis refers simply to an inflammation of the joints. Each of its varieties has its own series of characteristics and affects certain people more frequently.

Even so, it seems that certain factors, like genetics, environment, and overall lifestyle are related to its appearance. For example, almost all of the types have a greater incidence as age increases.

Lifestyle and physical fitness levels have a significant influence. Being obese or simply overweight can produce an overload on the lower joints of the body, like the knees. Therefore, weight can be a triggering factor in arthritis.

However, this doesn’t mean that athletes are completely exempt from it. Sometimes, just the opposite occurs. Professional athletes are also prone to suffering from arthritis given the wear that occurs in their joints.

What’s more, being a man or a woman is also intimately related to the type of arthritis a person may develop. Nearly 60 % of those that suffer from arthritis are women. However, certain varieties–such as gout–are more frequent in males.

You may also want to read: 6 Tips to Prevent Arthrosis

Frequent questions about arthritis: What are the known causes?

Certain types of arthritis have a cause that can be determined. For example, we know that certain infections can make this condition develop. Some of these infections are tuberculosis, gonorrhea, and Lyme’s disease.

The same occurs with gout, which results from an excess of uric acid that deposits in the joints. At the same time, it’s important to note that a person’s occupation can also act as a trigger. Staying in the same position for many hours can lead to arthritis over the years.

Frequent questions about arthritis: What are some of the typical symptoms?

Arthritis tends to appear in the form of pain and difficulty in moving the affected joint or joints. On some occasions, it also involves rigidity and swelling in the same area. It may affect just one joint or many joints at the same time. It may also be symmetrical or asymmetrical.

Frequent questions about arthritis: Is it treatable?

For example, patients can take non-steroidal anti-inflammatory drugs (NSAIDs) to reduce swelling and relieve the pain. They’re almost always the first step in treatment. It’s important to know that each treatment can be individualized and adapted to the type of arthritis.

Therefore, if you’re experiencing some of the symptoms and think you may have arthritis, you’ll need to see a doctor. You should investigate the cause and establish a therapeutic plan that’s specifically for you. At the same time, you can ask them any other questions you may have about this common – but frequently misunderstood – condition.

Five Medicinal Plants to Manage the Pain of Rheumatoid Arthritis
Medicinal plants with anti-inflammatory effects can help relieve the pain of rheumatoid arthritis. However, it’s essential to evaluate side effects. Read more »
Link copied!
Interesting Articles
Illnesses
What are the Effects of Gluten on the Body?