People who suffer from this disease and follow a gout diet also need to take drugs to control their pain and reduce uric acid levels. 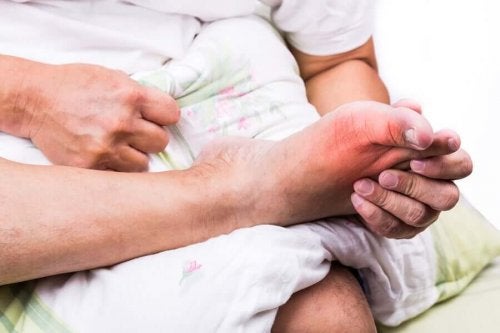 A gout diet can help reduce blood uric acid levels. But it can’t cure the disease. However, it can reduce the risk of recurring and painful gout attacks and may reduce the progression of joint damage.

People who suffer from this disease and follow a gout diet also need to take drugs to control their pain and reduce uric acid levels. In this article, we’ll show you the dietary recommendations and prohibitions to improve this condition.

This is one of the most common metabolic disorders and a painful form of arthritis. It’s caused by an increase in uric acid in the blood, which is known as hyperuricemia.

It doesn’t usually cause previous symptoms, although it can become deposited in the joints, leading to really painful inflammation that can be accompanied by fever.

The body produces uric acid when it breaks down chemicals called purines. Although purines occur naturally in the body, some foods are rich in them. The body excretes uric acid through the urine.

To avoid gout attacks, or at least slow down joint damage, you can resort to certain foods as a method of reducing high uric acid levels.

You should also read: Do You Suffer from Gout? Avoid These 7 Foods

Factors to consider in a gout diet

1. Urine pH. It’s important to try to follow a basifying or alkalizing diet to slightly change the urine’s pH and promote elimination. You can achieve this mainly by:

2. Purine ingestion. You need to pay close attention to the foods you eat and how you prepare them. When you boil a food that contains purines, a large part of them pass into the cooking water. Therefore, boiling is a good way to reduce purines in food. Nevertheless, you need to avoid broths.

3. The intake of fructose. Once the body assimilates fructose, it metabolizes it into xanthine, a purine that eventually passes into uric acid. For this reason, experts recommend that people who suffer from this condition only consume one piece of fruit a day and choosing the fruits that contain the least amount of fructose.

This article may interest you: Gout: 8 Foods that Can Cause It

Following a gout diet can help limit uric acid production and boost its elimination. While it may not be enough to follow a diet to lower blood uric acid levels without drugs, dieting can help decrease the number of attacks and moderate their severity.

Allopurinol for Gout: Side Effects and Indications
Allopurinol is a medication for the treatment of gout and high levels of uric acid in the body. It's for those cases in which gout is due to other drugs. Read more »