The Differences Between Apoptosis and Necrosis

Apoptosis and necrosis are two terms that refer to two ways that cells die. However, they're not the same. Cells can die in a programmed, nature manner or undergo an extensive dying process. Learn more here! 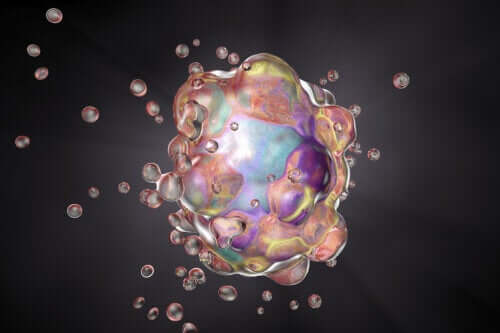 Cell death in human tissues and in that of other multicellular organisms is a normal occurrence. In fact, apoptosis and necrosis are two terms that refer to two ways that cells die. The number of cells in different tissues is determined by a homeostatic balance between the creation of new cells and the death of depleted cells.

In the case of apoptosis, it’s a natural process that’s genetically programmed and responds to homeostatic mechanisms. However, there are failures in the activation of apoptosis that can trigger problems in the body.

On the other hand, necrosis is an acute process produced by a massive cellular injury or disease.

Cellular mechanisms of apoptosis and necrosis


Cell death is the cessation of the vital functions of a cell. This is the result of irreversible morphological, functional, and chemical changes.

Overall, it can occur due to many and varied causes. These include loss of function, mechanical damage, infections, chemical agents, or lack of nutrients, among others.

First, necrosis occurs acutely, in a non-physiological manner, due to aggression that causes injury to a significant portion of the tissue. It can occur, for example, in some of these situations:

The action of toxins, a lack of oxygen, massive aggression, or any other situation that generates a decrease in ATP (adenosine triphosphate) can trigger the process of necrosis. ATP is a substance that provides energy to cells and without which they can’t perform any of their functions.

This lack of energy causes the cell organelles, which are different structures that perform vital functions in the cell, to become disorganized. Likewise, the cytoplasm, which is the part of the interior of the cells where the different organelles are located, breaks down. Some of the alterations that necrosis produces in cell organelles are:

During necrosis, the DNA splits into random, irregular fragments. And as a consequence of the loss of continuity of the cell membrane, the contents of the cell’s interior spill out of the cell.

This process causes the cells of the immune system to move to the area where the necrosis has occurred, triggering an inflammatory process.


The process of apoptosis was discovered in 1972 and was the focus of histological studies until the end of the 1980s. However, it was only in the 1990s that scientists managed to discover the genetic and molecular mechanisms that the process involves.

This cell death process can occur naturally or as the result of an illness, but without ATP loss. This is because, for apoptosis to take place, it needs to consume energy.

A genetically and synthetically motivated command initiates a series of biochemical reactions that lead to changes in cell morphology and, ultimately, to cell death. All of this is a response to physiological or pathological events.

In cases where apoptosis is the result of an illness, it’s because the disease motivates the cell to induce its own death. Histologically, it involves the condensation or shrinkage of the cell organelles found in the cytoplasm.

The chromatin doesn’t break down but condenses to form apoptotic bodies. The immune system doesn’t degrade this condensed chromatin, so inflammation doesn’t occur. Rather, neighboring cells capture it. This process occurs in isolated cells and not in whole areas of tissue.

In conclusion, apoptosis and necrosis differ in the stimulus that triggers both processes. There are also differences in the energy requirement, histology, and DNA breakdown.

In both processes, cell organelles and the cell membrane are altered. While apoptosis is occasional and develops in isolated cells, necrosis, on the other hand, becomes evident in entire portions of tissues.

Femoral Head Avascular Necrosis
Avascular necrosis is the death of bone tissue. Why does it happen? How does it affect the lives of patients? In this article you'll learn everything you need to know. Read more »
Link copied!
Interesting Articles
Anatomy and physiology
The Causes of Stained Teeth