The Benefits of Raising Bilingual Children

Speaking more than one language gives adults a great social and professional advantage, but it has even more benefits for kids. 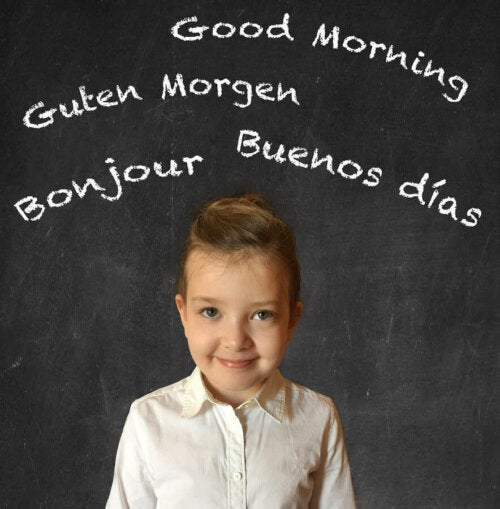 In an increasingly global society, it’s common to see children grow up in a multicultural environment where they speak several languages ​​at home. This has opened up the debate as to whether it is healthy to raise bilingual children. While some think it’s a good thing, others think that it may confuse kids.

Is it healthy to raise children in bilingual environments?

People who think that speaking in two languages ​​to children is counterproductive argue that the mixture of languages ​​will make it more difficult for them to socialize and learn. After all, they may confuse languages when trying to express themselves and will have difficulties differentiating between the languages.

However, experience and studies show just the opposite. “Children exposed to more than one language have a higher tissue density in the areas of the brain corresponding to learning, language, memory, and attention,” says pediatrician Gwendolyn Delaney, summarizing many studies.

Censuses project that large cities will have 50% of bilingual children in kindergarten by 2035. However, studies on the effects of this trend are scarce, although they all indicate that it has many positive aspects.

Does being bilingual confuse children?

Adults who speak multiple languages often ​​have no problem differentiating when to use one or the other. Some think that for a child who is just learning to speak it can be more confusing.

The American Linguistic Society assures us that children quickly learn to understand the differences between one language and another. They might make minor mistakes in sentence construction or pronunciation, but they correct these without difficulty.

There may also be a mixture of codes, as defined by linguist Barbara Pearson in her book Raising a Bilingual Child when referring to using words from one language interspersed in another. However, the author considers it to be normal learning behavior and not a symptom of confusion or dyslexia.

Psychologist Laura Namy explains that using a word from one language as part of their conversation in another language doesn’t mean that they don’t know which word belongs to one language or another. Studies show that as early as two years old, boys and girls can choose which language to use according to the speaker.

It’s clear that speaking more than one language offers professional and cultural advantages. However, in addition, some studies indicate that it can also offer advantages in social behavior.

A study at York University in Toronto, Canada suggests that bilingual children respond better to different changes in topics and subjects in schools. Other studies also open up the possibility that learning multiple languages ​​can help improve memory during childhood.

Psychologist Glenn Schellenberg believes that communication skills such as languages ​​and music give an advantage in the breadth of knowledge. This doesn’t mean that bilinguals are necessarily more intelligent, but that they have more tools for their cognitive development.

Should you prioritize a language when talking to bilingual children?

In classical education, they recommended you use only one language in daily communication with children and leave the secondary language for school instruction. Those concepts have changed.

Linguist Annick De Houwer believes that children who constantly hear two languages ​​learn them without difficulty. They can even understand the differences when they speak two different languages ​​with the same person.

The American Linguistic Society explains that nobody teaches infants to speak. They learn out of a need for communication and will choose a primary language on their own.

Many parents of bilingual children are also bilingual and speak two languages ​​interchangeably in normal conversation. They may even code switch unconsciously even while they’re speaking one language.

There aren’t many studies on how this affects children and the results are mixed. However, the latest research indicates that children adapt to and understand the mix of codes, which quickly disappear when they go to school.

At what age is it best to expose children to multiple languages?

David Birdsong, director of the Department of Languages ​​at the University of Austin, Texas, explains that there’s no shift in the development of language learning that makes it worse, but there is a decline in learning skills over the years.

As we become accustomed to language-specific vocalization and listening, the assimilation of particular sounds from a different language becomes more difficult. Therefore, learning two languages ​​at an early age makes it easier to adapt to the differences in languages.

Five Exercises to Promote Speech in Children
It’s vitally important that children develop their verbal abilities. One way to do this is to perform some exercises to promote speech in children. Read more »
Link copied!
Interesting Articles
Children
The Signs of a Spoiled Rotten Child