The Anatomy of the Back Muscles

It's important to know the anatomy of our back muscles since they're so important for the human body. Some aid our posture, while others are in charge of basic movements. In today's article, we'll tell you what you need to know. 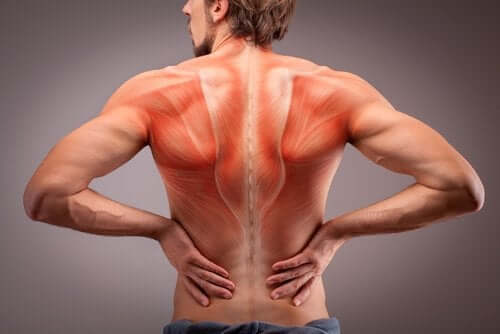 Overall, we can divide the back into two regions:

The anatomy of the back muscles basically defines their functions according to the location they occupy in the human body and to the other structures with which they connect. These muscles determine body posture and also regulate the three basic movements of the trunk: flexion, rotation, and extension. They’re a common object of study in the field of occupational medicine due to common workplace injuries.

The back muscles contribute to the protection of the organs of the thorax and abdomen, forming part of the walls that isolate them from the outside. Some of these muscles, usually the smallest ones, are also part of the mechanism of mobilization of the upper limbs.

We won’t describe all the back muscles in this article, but we’ll see an overview of the most relevant. Thus, we’ll divide them into three regions, according to their depth. So, let’s see what the deep, intermediate, and superficial muscles are about.

The anatomy of the back muscles: The deep plane

These are the muscles that are farther from the surface, closer to the internal organs and the spine. As a general group, they extend from the neck to the sacrum and fulfill a basic and fundamental function: to control the posture of the entire body.

You may be interested: The relationship between the spine and the organs

We can summarize the function of this muscle group as those regulating the movements of the scapula. They are, therefore, directly linked with the bone that we know as the shoulder blade. This bone pseudo-articulates with the rib cage, so some refer to it as a “false joint” because it is not typically made up like the other joints. Instead, it’s a bone surface (the scapula) on muscles (the Serratos).

The anatomy of the back muscles: Superficial plane

These are the best known because they’re linked to bodybuilding and aesthetics. Good development of these back muscles generates a characteristic figure in those who exercise regularly.

However, they have an importance that is far from aesthetic in function. The muscles of this plane are actively involved in the movements of the shoulder joint.

Find out more: Find Out How to Stretch Your Spine in Just 2 Minutes

These are the two most relevant:

We hope you enjoyed learning a little more about your body and muscles!

Exercises for Abdominals without Hurting Your Back
The abdominal muscles cover the abdominal wall. The abdominals are responsible for stabilizing the body, posture, protecting internal organs, and so on. Read more »
Link copied!
Interesting Articles
Anatomy and physiology
Twelve Exercises to Overcome Shoulder Tendinitis