The Advantages and Disadvantages of Cloth Diapers

Should a baby wear disposable or cloth diapers? The savings and amazing environmental impact when you opt for cloth diapers may give you the impression that they're the best option. However, there are a few small disadvantages to also keep in mind. 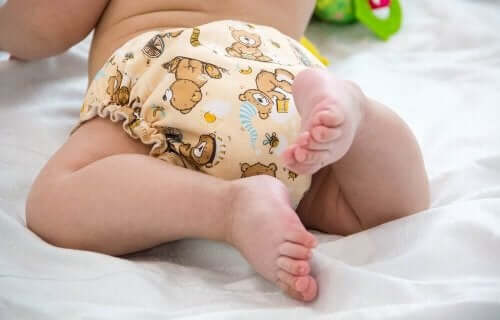 Lately, many mothers have decided to use cloth diapers. After all, it’s a much cheaper and more environmentally-friendly solution than using disposable ones. This option has some advantages. However, there are also many disadvantages you should consider when selecting the diapers you’ll use for your baby.

Before the appearance of disposable cellulose diapers, cloth diapers were the norm. Now, years later, many women are trying to bring them back for two main reasons:

Indeed, although at the beginning you’ll have to make a significant expense to acquire them, the fact that they are washable and reusable means long-term savings.

Additionally, cloth diapers are adjustable and hypoallergenic. They’re usually made with natural fibers fabrics (so don’t think we’re talking about the diapers used by our grandma!). The new ones are relatively easy to wash and don’t pose any major hygiene problems.

As with everything, in addition to their many advantages, there are some drawbacks to cloth diapers. Here, we’ll take a look at some of the advantages and disadvantages of both kinds of diapers to help you make an informed decision.

The Advantages of Cloth Diapers

They’re better for your baby’s skin

The first advantage of this type of diapers is they’re healthy for your baby. In fact, they’re made from 100% natural products such as cotton and bamboo so the risk of skin irritation is minimal.

Additionally, cloth diapers don’t contain chemicals that could lead to an allergic reaction. Similarly, babies who wear them have a lower rate of dermatitis.

We recommend you read: Why You Shouldn’t Circumcise Your Baby

Since these are natural and breathable fabrics, their use in times of heat allows the skin to perspire and doesn’t hold sweat and excessive heat. Likewise, the touch of the fabric and its softness cannot be compared with that of disposable diapers.

They’re better for the environment

Using cloth diapers is environmentally friendly. Indeed, many of us are well aware that about 20 billion disposable diapers are dumped in landfills each year, accounting for more than 3.5 million tons of waste. For instance, disposable diapers take about 500 years to decompose and release methane into the air. High concentrations of this gas can be explosive and flammable. Methane is also dangerous to breathe in because it replaces oxygen.

As we mentioned above, you can save a lot of cash if you use cloth diapers, in the long term that is. This is because even though the first expense will be higher than buying a disposable package, you can reuse them and not make a huge expense every week to replace them. You do the math.

Likewise, you can either get some from one of your friends or pass them along to other new mothers when you no longer need them. This way, some mothers won’t even have to make an initial investment.

You can decorate and customize cloth diapers

These diapers are not for single use and, also, they’re made of cloth. So, you can embroider them or decorate them in some other fashion. The ones sold at the stores already come with beautiful, original, and even funny designs.

You can even match them with your baby’s outfits!

We recommend you read: Essential Items for Newborns

The Disadvantages of Using Cloth Diapers

You must also exercise special care when washing them because, if you don’t do it properly, the diapers will keep odors and cause problems. Use neutral detergents and avoid the use of bleach and other types of disinfectants as they could irritate the baby’s skin.

They’ll sit around until you’re ready to wash them

When you use disposable diapers, you usually just throw them in the trash. However, this is an inconvenience when you’re away from home and must change them as you have to keep them in a bag until you return home and you can wash it.

If you’ll be gone for a short amount of time, it probably won’t be a problem. However, if you are going to be away for quite a few hours, or want to travel, the odors can get quite unpleasant.

Some daycare centers won’t accept them

Most daycare centers aren’t interested in dealing with cloth diapers. It’s understandable as they don’t wish to keep them in a dirty pile until you pick them up. So, most of them will require that you bring disposable ones as a condition for admitting your child.

As you can see, there are many, many advantages to using cloth diapers. However, there are a few disadvantages, as well, so take it all into account. Keep in mind that you don’t have to be a purist either way and that you can always alternate the use of cloth and disposable diapers.

When it comes to the environment, your baby’s skin, and your wallet, we suggest cloth diapers. However, it’s much easier to opt for disposable diapers when you’re away from home!

Should You Wake Your Baby to Change Their Diaper?
Some parents are not sure if it's a good idea to wake up their baby to change their diaper. They may ask themselves this question every day. Read more »
Link copied!
Interesting Articles
Babies
Discover Why Babies Stare