Why Do We Sleep Poorly? Our Ancestors Have the Answer

Historically, this sleep pattern only appeared in the 17th century. So, why do we believe this is a sign we sleep poorly? 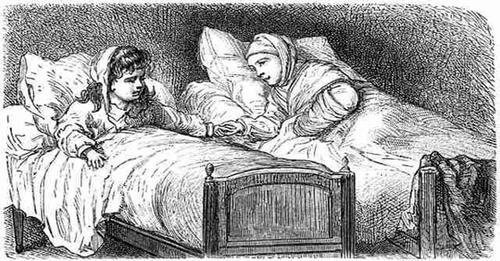 We are always recommended to sleep 7 to 8 uninterrupted hours a day. This is so we get a good quality sleep that will also contribute to a better quality of life. However, this makes us worry when we wake up in the middle of the night and cannot fall back asleep. So why do we sleep poorly? The answer may lie with our ancestors.

When you wake up in the middle of the night and can’t get back to sleep, it may make you wonder why you sleep poorly. Nowadays, this is considered a sleep “alteration” or problem. However, it could be something more natural and beneficial than you realize.

In the early ’90s, psychiatrist Thomas Wehr carried out a study in which a group of people was exposed to darkness for 14 hours every day for a month. It took a little bit to get results but, in the fourth week of the investigation, they could determine that their sleep patterns had changed.

Everyone in the group was used to sleeping more than 6 hours in a row. However, in the fourth week of the study, they slept for 4 hours, then stayed awake for 1 or 2 hours, and then fell back asleep for 4 hours.

The results of the study left an impression on many sleep scientists, but they still think that it’s best to keep the habit of sleeping 8 uninterrupted hours a day.

Sleeping Patterns Were Different in the Past

In 2001, the historian Roger Ekirch from Virginia Tech University published a 15-year research paper that revealed historical evidence that proved that human beings tended to sleep in two distinct phases.

In 2005, he published a book called At Day’s Close: Night in Times Past, which included around 500 references of a segmented sleep pattern. These references included diaries, medicine and literature books, and other sources like Homer’s Odyssey and Nigerian tribes.

This research project showed that human beings are not always capable of sleeping 8 hours in a row, uninterrupted. Instead, it suggested that for many people it is easier to sleep in shorter periods throughout the night, which add up to the hours recommended by experts.

In this way, people who tend to wake up in the middle of the night don’t actually sleep poorly. Historically speaking, it’s quite normal.

In the old days, the sleeping pattern was very different. People slept for 3 or 4 hours, then stayed awake for 2 or 3 hours. They then went back to sleep until the early hours of the morning. People spent a total of 12 hours in bed, which was normal to get proper rest.

However, at the end of the seventeenth century, this sleeping pattern started to change. As a result, humans adopted the habit that we all know today.

According to Ekirch’s investigations, the two-phase sleeping pattern began fading out in the 17th century. This was especially true among urban upper classes in northern Europe. Then, in a time period of 200 years, it reached the rest of Western society.

By the 1920s, the idea of having two short periods of sleep at night had completely disappeared.

Do You Sleep Poorly? Changes in Culture and Society

To some experts, segmented sleep is natural for the body and many people still experience it frequently. According to Ekirch’s conclusions from his years of research, many of our sleeping problems could be due to the human body’s preference for two-phase segmented sleep.

To support this, Ekirch used the fact that at the end of the nineteenth century, what we know today as “sleep insomnia maintenance” appeared. This refers to the problem of waking up in the middle of the night and having difficulty falling back asleep. This happened right when the segmented sleep pattern started to disappear.

According to psychologist Greg Jacobs, the idea of one long sleep instead of segmenting it could become harmful, because some people could wake up in the middle of the night, full of anxiety, which can prevent them from falling back asleep and make them stay awake all night.

In the old days, the time between sleep was used to meditate on dreams, read, pray, or do spiritual practices. Jacobs considers these types of activities to be key in regulating stress naturally.

For that reason, it’s now common for people to suffer from more anxiety, stress, depression, or alcoholism, especially if you keep in mind that technology has also changed peoples’ sleeping habits. If you think you sleep poorly, consider this and maybe try to get more rest or change your habits.

Why Babies Sleep Best Next to Their Mothers
It's normal and natural for babies to fall asleep when their mother is nearby. That's why it's important that young babies sleep near their mothers. Read more »
Link copied!
Interesting Articles
Did you know?
New Year's Traditions Around the World