Sexuality in Old Age - What Happens?

Although physical and psychological changes occur during old age that affect sexuality, this does not mean that it is the end of sexual life. What should you know about it? 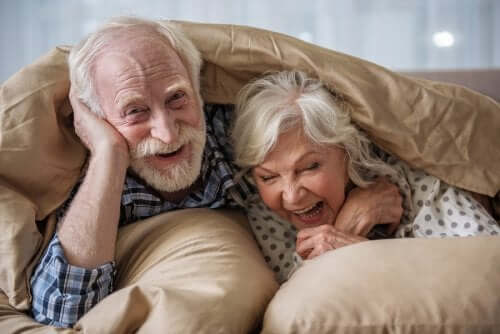 There are women who say that their sex life began to thrive after their reproductive stage ended. Also, there are many men who think that after 50 years their sexuality will end. In reality, the opposite can happen.

The term “sexuality” is broad and encompasses many aspects of a person’s life. Dr. Herrera, Chief of Geriatrics Service in Chile, stressed that the concept of sexual health is this:

“The psychological expression of emotions and commitment that requires the greatest quantity and quality of communication between partners, in a relationship of trust, love, sharing and pleasure, with or without intercourse.”

Therefore, sexual life doesn’t only imply intercourse. It also includes other expressions of affection that contribute to bringing couples closer together.

Changes in sexuality in old age

As the body changes, it’s completely normal for the sexual organs to also undergo some changes.

For men, the changes are as follows:

In women, the changes can be:

You may be interested in: Five types of orgasms and how to get there

Other changes in sexuality in old age

There are four phases in which changes occur in the sexual response cycle.

In men, these changes are the following:

Changes in women in old age:

When it comes to women, the phases are similar, but the intensity is not the same.

Despite this, the factors we’ve mentioned don’t have to mean the end of sexual life in old age. Studies show that there is a decrease in the frequency of the exercise of sexual function with age. However, it’s also true that maintenance depends on good physical and mental health.

This is because, in some cases, chronic pathologies can be added. Furthermore, the consumption of some drugs affects the sexual behavior of the elderly. This is either because they can alter the hormonal system or for other reasons.

Currently, there are several treatments that can help improve the quality of sexual life in old age. You should also pursue healthy habits.

One of the treatments is sexual therapy for the elderly, for example. Also, the use of testosterone, injected or oral medications, vacuum tumescence devices, surgical treatments, and more.

Despite what many think, Doctor Llanes emphasizes that many of the sexual dysfunctions in old age are due to ignorance. There can also be feelings of disability, as well as false expectations.

Doctor Llanes also discusses the recommendations of Masters and Johnson. They state that there are three necessary steps to take in order to enjoy a full sexual life in old age:

Following these recommendations, not only can you enjoy a full sexual life in old age, but also shatter the myth that sexuality ends with old age. The truth is, it ends only with death and is not reduced merely to intercourse.

Sex
Having Sex in Public: The Advantages and Risks

When it comes to sex, there are a lot of important factors, and one of them is the setting. Therefore,…

Sex
What is Sexual and Reproductive Control?

Have you ever heard of reproductive control? Are you aware of the different birth control methods that allow people to…

Perhaps you’ve thought about using homemade lubes, either because there’s a lubrication problem or because you think it’ll make sex…

Sex
How to Start a Conversation About Your Sexual Desires

Why do we have such a hard time starting conversations about our sexual desires? The answer is clear: Most of us…

Stuttering is a problem that affects the flow of speech. The person who has it repeats words, interrupts their own…

Alprazolam is an anxiolytic drug that belongs to the benzodiazepine family. Specialists often prescribe this drug in the treatment of episodes and attacks related to anxiety. Although benzodiazepines also have sedative…

If you're looking for a natural remedy to treat flatulence, in this article, you’ll find some medicinal plants that could…