Sarcoma is a type of cancer. Specifically, these types of cancers affect the connective tissue of the body and can be very aggressive. In today's article, we'll tell you how they originate and the available treatments. 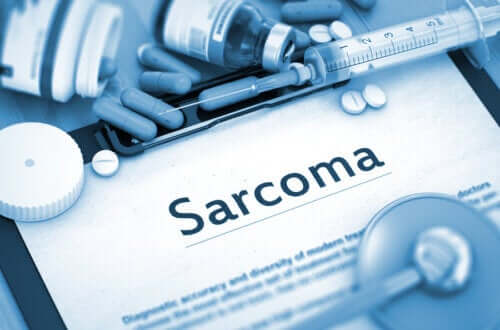 Sarcoma is a type of cancer that’s the result of abnormal malignant growth in some of the body tissue cells after these begin to multiply out of control. Typically, sarcomas originate in soft body tissue such as lipids, muscles, cartilage, blood vessels, and also in the bone tissue.

Thus, sarcoma is a cancer of the connective tissue. This extensive tissue is also referred to as “supportive tissue.” Its main characteristic a large amount of extracellular matrix between its cells. Even though sarcomas can appear anywhere on the body, they’re more common in legs and arms. They may also manifest within the cavity of the abdomen and even in the head.

Sarcomas aren’t common. In fact, less than 1% of the cancers that affect a human being are sarcomas. Similarly, a mere 2% of the deaths from cancer come from them.

The usual onset ranges between the age of 40 and 70 years. However, there are some which are characteristic during childhood. In general, these happen more often in men than in women.

The causes of sarcoma

As with many cancers, there isn’t a single specific cause for sarcoma. Doctors assume that several factors must coincide for a tumor to develop and for the cells to be out of control and multiply faster than usual.

When it comes to sarcomas, scientists haven’t been able to establish clear risk factors for all of its varieties.  Thus, their prevention is difficult. However, the studies continue around the world as scientists are looking for conclusions regarding these soft tissue tumors.

After years of research and experience, they have, however, established a few risk factors:

Continue reading: Five of the Rare Cancers You Should Know About

Sarcomas aren’t usually painful unless they’re advanced enough to put pressure on some body parts. Therefore, diagnosing them is hard because the symptoms take a while to appear.

Another characteristic that determines the lack of symptoms is sarcomas can be located deep inside. Thus, they’re often not immediately apparent. That said, the most common symptom is the appearance of a lump. Note that a palpable lump isn’t always due to sarcoma, but it might as well be a surrounding inflammation due to tumor growth.

Diagnosis and treatment of sarcoma

When a doctor suspects sarcoma, they’ll request some imaging tests to begin the diagnostic process. They may request an ultrasound, an MRI or a CT scan.

When the images are suggestive of the presence of a neoplastic process, then the next step is to do a biopsy. With it, they should arrive at a definitive conclusion that can confirm or discard the presence of a sarcoma.

The therapeutic options for a confirmed diagnosis are:

Finally, it’s important to remember that the appearance of a lump in any part of the body is a reason to see a doctor. Thus, you must consult a doctor so they can perform any necessary tests.

Don’t be too alarmed if you find a tumor under your skin, but see a doctor. A delayed diagnosis will slow down the prompt treatment that this kind of cancer requires.