Queen bee syndrome hides a series of deficiencies and insecurities that the affected women project onto other women. This, in the long run, causes them to be left alone due to their toxicity. 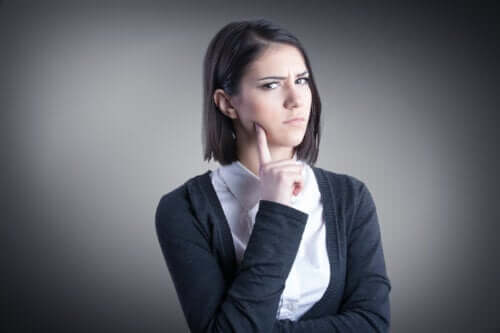 Queen bee syndrome isn’t recognized by psychology manuals. However, there are many people that seek help to identify it and point out the behaviors that some women have, mostly based on competitiveness.

In the hives, the queen bee has a protagonist role: she’s surrounded by many male bees, as well as females that aren’t fertile. This makes her the governess of those around her, and this is a position that many women long for.

The truth is that a series of emotional deficiencies are behind these attitudes and behaviors. Therefore, it’s important to take this into account before making any judgment. But what exactly is this “invisible” syndrome? How can we stand up to these toxic attitudes? We’ll tell you about it in the following article.

From a young age, we’re taught to compete with those around us. In fact, the impulse to compete that we feel comes from the eagerness to compare ourselves to others, something that can be seen in a lot of adults. In its intent to make us better, what it actually does is negatively affect self-esteem.

Because of this, when we try to improve ourselves, we don’t do it to better ourselves, but instead to show of. In reality, we often do it to be better than those around us so that they’ll be envious.

Queen bee syndrome it about all of this, but is particularly focused on women. In general, society teaches girls to envy and criticize each other.

In the case of men, their socialization is usually more focused on seeing others as friends or as battle companions when they play.

Although it’s true that, little by little, stereotypes evolve and education is more egalitarian, some parents still force their daughters to behave in this way. They’re unaware of all the consequences this can cause.

Queen bee syndrome: how to detect it

In order to know if a woman has queen bee syndrome, you just have to focus on her behavior. On occasion, you may think that she has a big ego, that she’s very competitive, or that she’s envious. However, if you take a closer look, there’s more:

As we can see, this attitude is very toxic. It causes a lot of pain to other people that only had the misfortune of being around someone who suffers from this syndrome. But what’s behind this syndrome?

Women with a lot of insecurities

Women who suffer from queen bee syndrome need to trample and undermine the self-esteem of those they consider to be their rivals. However, they do this because they don’t feel confident in being able to reach their goals and see others as obstacles to them becoming leaders.

Because of this, in reality, they’re projecting their insecurities onto other women. By doing so, they’re trying to get the security that they’re lacking in a harmful manner.

As we already mentioned, this makes them end up alone and without their main support: other women. Therefore, it’s important for them to reflect, if possible with the help of a psychologist.

Don’t let them influence you

Women with queen bee syndrome can harm others. If you recognize these characteristics in a loved one, try to be very careful. At first, they may seem harmless. But little by little, they can creep into your life until they completely destroy it.

Remember that your self-esteem must come first. The destructive criticisms of these people are unfounded and are due to their own shortcomings. You mustn’t give them the opportunity to negatively influence your mental health.

Link copied!
Interesting Articles
Relationships
Serial Monogamy: Jumping from One Relationship to Another