What is Pulmonary Tuberculosis and What Are Its Symptoms?

Today, the means exist to cure pulmonary tuberculosis, as long it's detected and treated in time. Otherwise, this disease can cause serious complications and even lead to death. 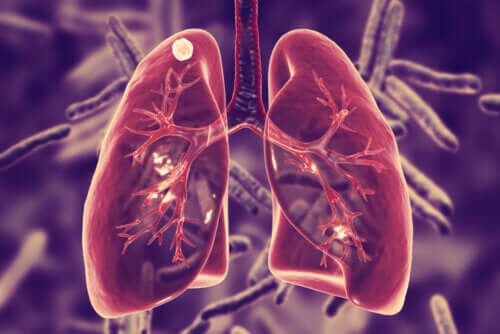 Pulmonary tuberculosis was a very serious public health problem in the early 20th century. In fact, an estimated 1 in 7 people died from it. Thanks to the development of certain drugs, the disease has been under control since the 1940s.

However, outbreaks of the infection occur from time to time. Pulmonary tuberculosis remains a problem, especially because of the emergence of a variety that’s been called multi-resistant, which is difficult to treat.

What is pulmonary tuberculosis?

Pulmonary tuberculosis is a disease caused by a bacterium called Mycobacterium tuberculosis. In most cases, this microorganism installs itself in the lungs. However, it can also affect other organs such as the brain and kidneys, as well as structures of the spine.

An important aspect is that the disease of pulmonary tuberculosis and latent infection are different. The first is the conventional pathology. The second is a condition where the bacteria is in the body, but doesn’t cause the pathology as such. It’s as if it were sleeping.

Most people who inhale the bacteria have an immune system that’s able to fight it and, as a result, prevent it from multiplying. However, the microorganism is still there, even if there are no signs.

These bacteria can remain inactive for many years or for a lifetime. However, if the immune system becomes weak, they become active, multiply and cause the potentially fatal disease of pulmonary tuberculosis.

Pulmonary tuberculosis, as it’s caused by bacteria, is a contagious disease. This means that an infected person can spread it to someone else who doesn’t have the infection. If the infection is latent, there’s no spread.

Transmission occurs through water droplets from a cough or sneeze of a person with the disease. Many people recover from pulmonary tuberculosis without serious illness. However, in some cases, the infection reactivates only a few weeks after it’s occurred.

Some people are at greater risk of developing pulmonary tuberculosis. These include the following groups:

The risk of suffering from pulmonary tuberculosis increases if a person suffers from malnourishment, lives in unsanitary conditions, or is in contact with infected people. Also, outbreaks are more frequent in communities where there are more HIV patients, homeless people, or resistant strains.

You may also be interested in: All About Rifampicin and Tuberculosis

As we stated, a person with the latent infection doesn’t spread the disease to others. In the same way, tuberculosis doesn’t spread by contacts such as shaking hands or sharing personal items (toothbrush, silverware, etc).

Nor does it spread by sharing food or drinks, kissing, using the same toilet, or by coming into contact with an infected person’s bedding. It’s not necessary to disinfect surfaces that a person with pulmonary tuberculosis has touched.

The most conventional symptom of pulmonary tuberculosis is a severe cough that can last three weeks or more. This cough is usually accompanied by bloody sputum. The affected person feels great discomfort and has the following symptoms:

Some people with pulmonary tuberculosis also have so-called Hippocratic fingers in the advanced stages. These have a widening, drum-stick shape, and a change in the angle of the nail growth.

It’s also common to have tender or swollen lymph nodes in the neck and other parts of the body. Similarly, there may be pleural effusion, that is, fluid around the lung. In some cases, complications appear such as liver inflammation, brown or orange tears and urine, rash, and vision changes.

Patients with the latent infection don’t have any symptoms or feel any discomfort. A skin test or blood test reveals that they are positive for TB when they undergo testing for another reason. Even if there are no symptoms, it’s important to initiate treatment to prevent progression of the disorder.

When the detection and treatment of pulmonary tuberculosis takes place early on, prognosis is excellent. Symptoms usually disappear within two to three weeks. Failure to treat the disease properly has fatal consequences.

Discover 6 Travelers’ Diseases
Many of the endemic diseases of tropical countries are spreading as travelers’ diseases. This is due to the fact that many more people are traveling. Read more »
Link copied!
Interesting Articles
Illnesses
Everything You Should Know about Hypochondriasis