Pulmonary embolism is a complication associated with other health problems. The mortality rate for this condition has been declining over the past several years. To ensure survival, it's crucial to detect it and treat it in time. 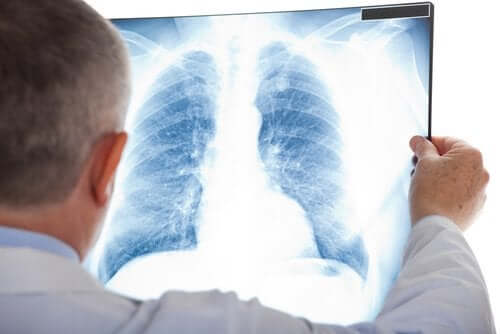 Pulmonary embolism is a serious and relatively frequent problem. Experts estimate that it occurs in one in every 1,000 people per year. However, they think this rate might really be higher, since not all cases receive medical attention.

Pulmonary embolism occurs when a mass, generally a blood clot, obstructs blood flow to the lungs. Although a blood clot is the most common trigger, other culprits could be a fat or air embolism.

Pulmonary embolism can be fatal. It’s currently estimated that between 8% and 10% of patients with the condition die. The severity of each case is determined by the size of the obstructed artery, as well as the amount of lung tissue affected.

What is pulmonary embolism?

To put it simply, pulmonary embolism occurs suddenly due to obstruction of a pulmonary artery. This generally occurs when pieces of a venous thrombosis separate and travel, becoming lodged in an artery in the lungs.

Doctors divide pulmonary embolism into two main groups, according to severity. They are:

The majority of pulmonary embolism cases are a secondary condition related to triggering risk factors. This means that they are a result of another health problem. The main risk factors are:

Another factor that can trigger pulmonary embolism is cancer. Lung cancer, pancreatic cancer, and cancers of the central nervous system are the most likely to causes complications involving thromboses. It’s the same situation with gastrointestinal tumors and blood neoplasms.

The hereditary component also has a major influence, although it’s not the determining factor. Pulmonary embolism is more common in women who take oral birth control. Additionally, pregnant women face a greater risk, especially during the third trimester and up to six weeks after giving birth.

Finally, the risk of pulmonary embolism is higher in those who have gone through in vitro fertilization, as well as in post menopausal women who are taking hormone replacement medications. The risk varies in the latter case, depending on which medications are being used.

Difficulty breathing and chest pain are the main symptoms of pulmonary embolism. Shortness of breath, or dyspnea, is the most common symptom. The condition manifests as difficulty inhaling deeply, and not being able to breathe fully and satisfactorily. The symptoms occur suddenly.

Also read: Chest Pains – Why Do They Happen

Additionally, the following symptoms are common:

Pulmonary embolism is diagnosed using a combination of clinical suspicion, diagnostic imaging, and D-dimer blood test. The patient’s symptoms determine the suspicion of pulmonary embolism. Chest X-ray, electrocardiogram, and a blood gas test serve as support when making a diagnosis.

Anticoagulants are the main course of treatment. At first, they are administered parenterally (intravenous, intramuscular, or subcutaneous), followed by subsequent oral administration.

If doctors detect and treat the condition in time, the patient’s prognosis is good. In 3.8% of cases the embolisms become chronic. Over the past several years, the number of patients who die while hospitalized for pulmonary embolism has decreased considerably.

Everything You Need to Know About Pulmonary Thromboembolism
Pulmonary thromboembolism is a serious disease that can lead to the death of the patient. Therefore, it's important to lead a healthy lifestyle. Read more »
Link copied!
Interesting Articles
Illnesses
Eczema and Stress: How Are They Related?