The Process of Diagnosing Dyslexia

Diagnosing dyslexya isn't an easy task since there aren't specific imaging methods to certify the pathology. How is it diagnosed, then? Keep reading to find out. 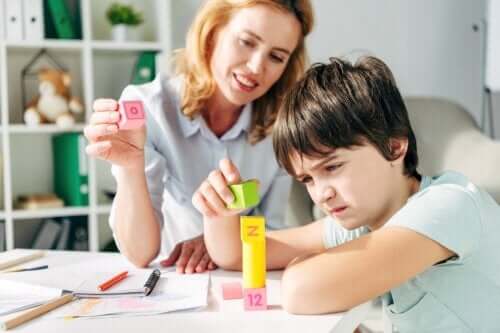 Diagnosing dyslexia isn’t as easy as some may think. In reality, it’s a thorough process that deserves all the attention. As a matter of fact, health professionals like to take their time when determining the existence of the disorder since it opens a range of possible treatments and future approaches.

The quality of life of a person with dyslexia depends on two things. First off, on how early the disorder is detected. Secondly, on the support they get from their surroundings. Multidisciplinary therapies are key when looking to incorporate the patient into normal and social life.

Before diagnosing dyslexia, it’s important to define it. In brief, it refers to a learning disorder (specifically of reading and writing), which appears in childhood. It has to do with the lack of achievement of certain parameters that are expected from the child at each age.

Now, there’s something quite striking about this disorder. Basically, those who suffer from it don’t usually have an associated problem that explains it from the outside. In other words, there’s no detection of physical or mental alterations that determine the existence of a failure in their learning process.

It’s very difficult for a dyslexic child to identify each letter of the alphabet and differentiate them. The sounds of words are also quite strange to them. They have serious trouble knowing what they’re reading, to the point that they change, substitute, or even distort the syllables. When they see just how difficult it is for them to interpret texts, reading becomes much slower.

Some authors state that the main problem here lies in the inability to decode the message. Basically, a dyslexic child hasn’t developed the ability to understand the code that others use to speak. As a result, they’re unable to see the proper meaning of the words they’re using.

Diagnosing dyslexia: symptoms you must watch out for

Diagnosing dyslexia is complicated since it basically depends on the interpretation that health professionals make. As of now, there are no fully confirmatory tests. For that reason, the individual needs to meet specific criteria to be able to establish the presence of the disorder. Let’s see what they are.

This is perhaps the initial and most prominent sign. In dyslexia, the child reads poorly because they use many incorrect methods to arrive at how they understand the meaning of the words.

They change one letter for another, modify syllables, rotate words and sounds, and read very slowly. Once they’ve finished reading, they may not know what the text said. This is because the sound of the alphabet doesn’t correspond to a cognitive meaning already worked out in their mind.

A dyslexic person’s reading difficulty definitely has an impact on their writing ability. When a dyslexic individual tries to put thoughts into writing, they tend to make a lot of mistakes. For example, they omit letters, change syllables, and don’t use (or misuse) punctuation marks.

These individuals have very poor syntax because they lack the tools to express themselves. A lot of the time, all they’re able to write down are scribbles. Undoubtedly, this shows just how difficult writing is for some of them.

It’s not uncommon for dyslexic children to arouse their teachers’ curiosity for having such good intellectual capacity in almost everything (except in language, of course). There’s no mental retardation – far from it, actually. In fact, in many areas, their development is within expected parameters.

School happens to be the main detection place for dyslexia. There, the dyslexic students don’t usually complete their language tasks correctly. For example, if their teacher asked them to point to capital letters or to find words in a word search, they’d be completely lost.

Their problem to put things in order and sequence sometimes extends to other more mathematical and geometric areas. However, it doesn’t always happen. For instance, when the individual’s difficulty expands in this way, then they’re unable to learn to multiply or put the days of the week in order.

It’s usual to suspect dyslexia when children who struggle at school suffer from severe stress that affects their daily lives. The mere fact of being delayed in comparison to their peers’ development can damage them emotionally.

Furthermore, behavior disorders tend to be relativized in educational institutions. Adults often assume that a child’s problems come as a result of their lack of interest in learning and vice versa. Little by little, the dyslexic person enters a category of a bad, slow student with whom teachers mustn’t waste time because they won’t learn anyway.

Actually, some patients receive a depression diagnosis before a dyslexia diagnosis. It’s safe to say that the time wasted in the wrong diagnosis delays the professional help they actually need. They even take prescription drugs that aren’t at all helpful for their condition.

Who’s in charge of diagnosing dyslexia?

Since there are no complementary diagnostic methods, such as MRIs or brain scans that may lead to the diagnosis, it’s totally valid to wonder who makes the diagnosis and how they do it.

Within learning disorders and their approach, we’d say that educational psychologists, speech therapists, and neuropsychologists are the specialists trained for this task. Through tests and evaluations, multidisciplinary teams can gather enough criteria to get to a conclusion.

In the end, the health team needs to sign a report that certificates the person’s diagnosis. The next step is for the patient’s family and overall surroundings to commit to adapt the knowledge acquisition process to their journey.

In brief, don’t hesitate to arrange a consultation with the psychopedagogy office in your local school or health centers. As a parent or caregiver, getting a dyslexia diagnosis early can completely change a child’s future evolution.

Pay Attention: These Traits Could Indicate that Your Child Has Learning Difficulties
Angelica is 4 years old. In class she doesn't speak or share with other children. She also doesn't seem to follow the teacher's instructions. The school psychologist and the teacher arrange a meeting with Angelica's parents because they glimpse that she possibly has learning difficulties. Read more »
Link copied!
Interesting Articles
Illnesses
The Symptoms and Treatment of Granuloma Annulare

Interesting Articles
Health
How to Heal a Piercing