The goals of the treatments for postmenopausal vaginal atrophy are to restore the physiology of this body part and relieve symptoms. Read on to learn more! 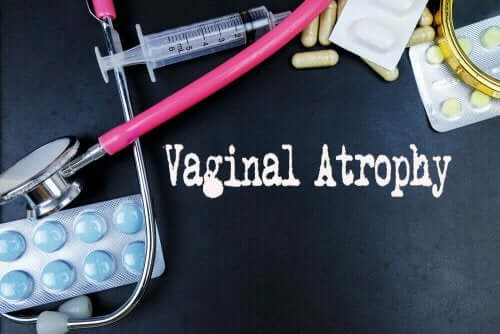 Postmenopausal vaginal atrophy appears as a set of symptoms and signs that are associated with decreased estrogen and other sex steroids. It’s a chronic and very common condition during menopause.

It often goes undiagnosed, meaning it can have a major impact on the patient’s sexual health, as well as her quality of life. Experts associate decreased levels of estrogens and other hormones with changes in the labia majora and minora, vaginal introitus, vulval vestibule, clitoris, vagina, urethra, and the bladder.

Estrogen is necessary to maintain vaginal structure and function. In this regard, experts associate decreased levels of these hormones with changes in the physiology of the vagina, which underlie the symptoms that characterize vaginal atrophy.

The symptoms of postmenopausal vaginal atrophy

Menopause is a natural and physiological process that represents the end of the female reproductive life. This process is associated with a series of changes, some temporary and others definitive, in a woman’s body.

Postmenopausal vaginal atrophy is a condition that can make women suffer a moderate to acute clinical picture characterized by the following signs and symptoms:

However, although vaginal dryness is more common during menopause, this problem can affect women at any stage of their life due to the use of birth control, lactation, postpartum, or peri- and postmenopause. In fact, more than half of the women who suffer from this disorder are under the age of 50.

Certain factors contribute to the development of vaginal atrophy. Some of them are:

You may also be interested in reading: How to Cope with Postmenopausal Atrophic Vaginitis

The goals of the treatments for postmenopausal vaginal atrophy are to restore the physiology of this body part and relieve symptoms. When the symptoms are mild, first-line treatments include the use of non-hormonal vaginal moisturizers and lubricants during intercourse to improve vaginal dryness, burning, or stinging.

Additionally, moisturizers enrich collagen hydration in the vagina and relieve symptoms. However, they don’t improve the vaginal epithelium.

Although it’s very difficult to prevent postmenopausal vaginal atrophy, you can relieve your symptoms as much as possible. You should start by adopting a healthy lifestyle and by eliminating risk factors such as tobacco.

This article may interest you: All About Your Vagina According to Your Age

Other treatments for postmenopausal vaginal atrophy

Besides the measures we mentioned above, other methods can also improve this condition.

For example, there’s laser treatment. This is a minimally invasive technique that uses heat to stimulate the production of collagen in cells of the vaginal area. It replaces the driest skin layers with new cells and reorganizes and balances the components of the vaginal mucosa.

Common Causes of Vaginal Dryness
Vaginal dryness presents itself when estrogen levels are low. But there are many causes of vaginal dryness and most women don't know them. Read more »
Link copied!
Interesting Articles
Illnesses
What is Venous Thromboembolic Disease?